Picnic with the Pinks

Thing 1 and Thing 2 had a school holiday, and we spent the day together. It was the first time they'd been to the top of the mountain... 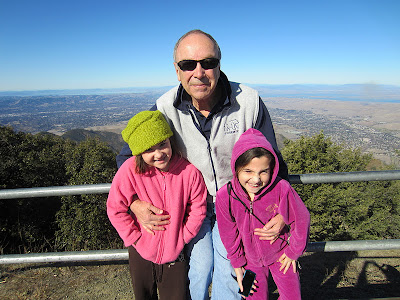 ...where it was still freezing - literally. So we had our picnic halfway down. There are not many things both Things like to eat, so I got up at dawn to roast a chicken (cold chicken isn't one of the things they eat) and it was a huge hit. Then we played Spot Your House. 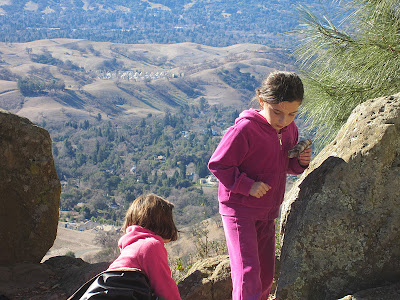 They did.
Thing 2 wanted to build stuff, and when it got too cold outside we made bath salts for sore muscles. 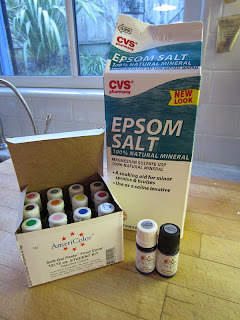 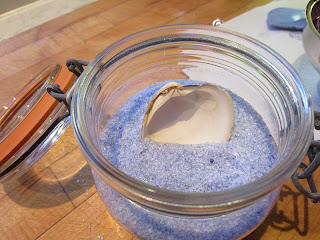 I may sleep for a week, but I haven't had so much fun since I was a kid. I think there's a lesson in there - if you want to have as much fun as you did when you were a kid, get a kid to be your guide. Thank you Pinks.
Posted by Postcards From The Hedge at 9:16 PM 2 comments:

It hasn't rained here in over a month. Maybe two. It is so dry my hair crackles, and my skin itches. Still we managed to have an almost 24 hour power outage.  Wind. Trees. Don't ask.
At first it was charming, going to bed by candlelight and giggling as we snuggled under the covers.
And then came the morning. Who knew the stove wouldn't light, even with a match? I knew about the electric ignition, but there must be a safety thingie in there somewhere to keep us caffeine-deprived sleep-addled people from blowing ourselves to kingdom come. Thank goodness there's a Starbucks on every corner.
We could see our breath lying in bed in the morning. We could have gone to my mom's to sleep - she had power. But we have down comforters and hats and jackets, and a very warm furry dog. 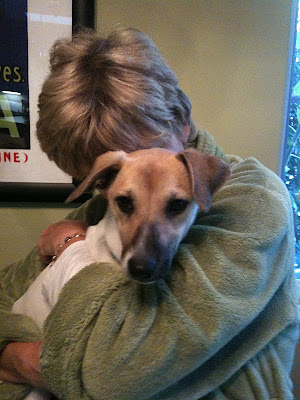 So we had an adventure.
And it has been beautiful, so many clear mornings with fog flowing along the bottoms of the valleys like cream. When Ally and I walk up the mountain I stop to gaze. She stops to do other things. 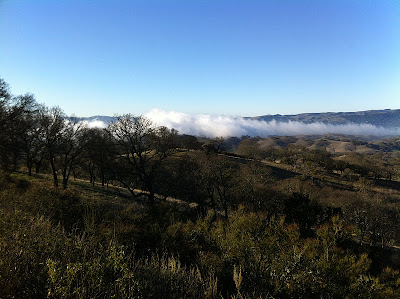 It's a spectacularly beautiful place to live, but if it doesn't rain soon things could get ugly. My daffodils are dry, the trees look crisp, the vineyard soil is cracked. The grass that sprouted in October when the rains began has not grown an inch since, and the hills, normally screaming green by now are just brushed with green. If you know a rain dance, now would be the time.
Posted by Postcards From The Hedge at 10:52 PM No comments:

It was cold - it's still cold - so I made cinnamon rolls from The Breakfast Book by Marion Cunningham. 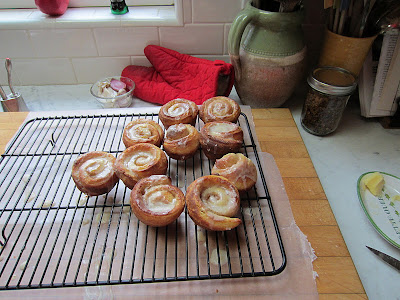 I cook from her books a lot. She re-wrote The Fanny Farmer Cookbook, she is an incredible teacher and writer, and if you don't have at least one of her books, get one. Now. Try any of the muffins in The Breakfast Book - persimmon. cinnamon butter puffs. orange. nutmeg. Are you hungry yet?
I shared. They went fast. They're smaller than the cinnamon bombs sold in bakeries everywhere, but they have just as much flavor in a smaller package. You bake them in muffin tins... 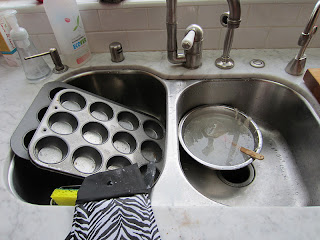 You have to start them the night before if you want to have them for breakfast. So forego that last cocktail and mix up a batch. Because it's still cold.
Glazed Cinnamon Rolls from The Breakfast Book by Marion Cunningham. Copyright Marion Cunningham
Makes two dozen reasonably sized cinnamon rolls
1/4 cup warm water
1 package dry yeast
1 teaspoon plus 1/4 cup sugar
4 cups all-purpose flour
1 teaspoon salt
1/2 pound (two sticks) butter, chilled
3 egg yolks
1 cup milk
filling:
1/4 cup (1/2 stick) butter, melted
6 tablespoons sugar
1 teaspoon cinnamon (I use Saigon cinnamon and yes it makes a difference)
glaze:
1 1/2 cups confectioners' sugar
2 tablespoons butter, room temperature
1 tablespoon water (a trifle more may be needed to make a manageable glaze)
Put the warm water in a small bowl and sprinkle the yeast over. Add 1 teaspoon sugar, stir, and let dissolve for 5 minutes.
In a large mixing bowl, stir together the flour, 1/4 cup sugar, and salt with a fork to mix them well. Cut the butter into pieces the size of small grapes and add to the flour mixture. Using either your hands or a pastry blender, rub or cut the butter into the flour mixture until it is distributed and there are coarse little lumps of butter throughout. Stir in the yeast mixture, the egg yolks, and milk. Beat until blended. Cover with plastic wrap and chill in refrigerator at least 6 hours (this dough can be refrigerated for 12 to 14 hours).
Divide the dough in half. On a lightly floured board, roll out half the dough into a rectangle about 10 by 12 inches. Spread 2 tablespoons of the melted butter over the rectangle. Mix the remaining 6 tablespoons sugar and the 1 teaspoon sugar together in a small bowl. Sprinkle half the sugar mixture evenly over the rectangle. Starting with the wide side, roll up the rectangle like a jelly roll. Divide the roll into twelve pieces by first cutting the roll into 4 equal portions, then cutting each portion into 3. Put the rolls cut side down in a greased muffin tin. Repeat these steps with the other half of the dough. Cover loosely and let rise for 1 hour.
Bake in a preheated 400 degree f oven for 20 to 25 minutes. Remove the rolls and put them on a rack set over a piece of waxed paper.
To make the glaze, sift the confectioners' sugar into a small bowl, them beat in the butter and water until smooth. Spoon a little on the glaze over each roll while still hot.
Posted by Postcards From The Hedge at 7:15 PM 1 comment:

I'm not as bad (or good depending on your viewpoint) as my friend Sue who puts up eleven trees (!) but I did have three this year - a garden tree, a kitchen tree, and a traditional tree. And a garland hung with travel ornaments. But this year the kitchen tree was my favorite. As I was hanging the ornaments I thought "this would be better if the ornaments were related" and so:
Breakfast: 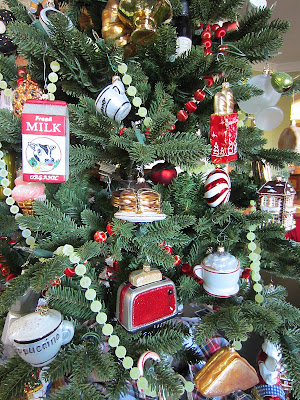 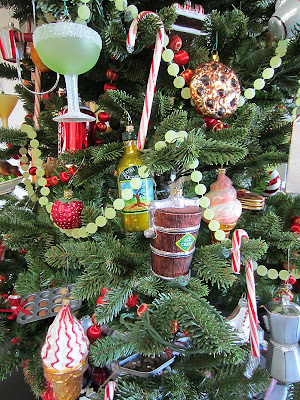 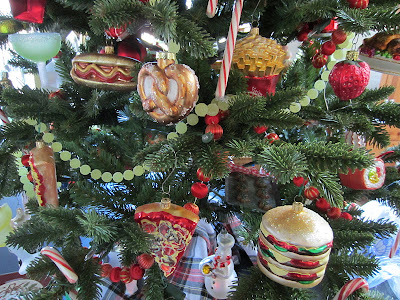 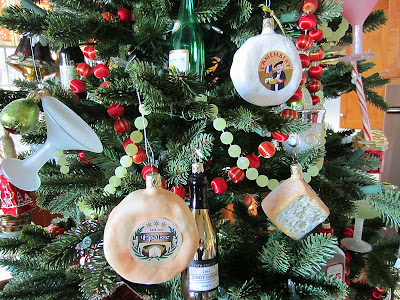 And you have no doubt noticed cocktails sprinkled liberally all around the tree.
So my friend Cathy comes over and I show her (she also thinks this sort of thing is fun. If you don't, then why have you read so far? Go mess something up).
Cathy takes a tour around my tree, gets a big smile, and says "It's just like your day!"
I so love my friends. Thank you to everyone who made this the Best Christmas Ever.
Posted by Postcards From The Hedge at 2:25 PM No comments: