On St. Patrick's Day we had been out to dinner with some friends.  They have recently lost their dog of nearly two decades, the senior statesman and welcome wagon of the neighborhood.  It's hit the whole family hard, and since I think everyone should have at least one dog,  Smiley Dog Rescue seemed the place to start.  On my new Macbook Air of course.  And if you have a friend who isn't familiar with Pinterest of course you have to show them your boards...

The internet was soooooo slow, and as we were waiting for a page, any page to load, I reached for my Irish coffee.  And poured it across the keyboard of my adored two week old Macbook Air.

The whiskey and whipped cream went into the keyboard and drained out the trackpad.  Sticky streaks marked the screen as I tried to wipe off some of the mess.  I tipped it up and more coffee and stickiness dripped out the bottom.

"Rice!" Leeann exclaimed.  "My iPhone got soaked, I put it in rice, and it's been fine." So into a big bag of rice went my Macbook Air, tipped on its side so it could drain.

I thought it would be a good idea to wiggle the hinge to try to get more liquid out before it dried and got totally gummed up.  Bad idea.  When I took it out of the rice the next morning there were rice grains stuck in the hinge, and I could hear more rice rattling around inside the computer.  Oops.

In tears we made an appointment at the Apple Genius Bar.  I had a sleepless night chastising myself.  I don't make a lot of mistakes, but this one was a doozy, and being a Lutheran...well, let's just say forgiving yourself is not part of the Protestant ethic as I learned it.

We thought about not telling them what had happened...for about one second.   It's the Lutheran thing, remember?  I imagine I felt a bit like a naughty Catholic at confession waiting to hear what could be done...I felt trepidation, guilt, remorse...

The young man who listened to our tale of woe said "At least it was Irish coffee.  On St. Patrick's Day.  You get points for that" and went off to see what could be done.  We sat in silence, surrounded by the happy din of the Apple store, and watched glumly as excited customers clutching their new toys grinned and threaded their way through the crowd and out the door.

When the young man came back, he said "I have some bad news.  Is there anything on this computer you can't replace?  Anything you haven't backed up?"  Nope, thanks to Wally's quick mind and his external keyboard (the one on the Airbook was frozen) we'd just backed everything up.

"Good!" he said.  "Here's a new Macbook Air.  You'll have to reload all your stuff, but since you backed it up, it won't be a problem, and you owe us zero dollars and zero cents."

We left the store grinning, me clutching my new computer to my chest.  I am writing this on my new toy, no coffee or tea in sight.

Only at Apple. Loyal for life.
Posted by Postcards From The Hedge at 9:13 PM No comments:

Back in the saddle again

Conventional wisdom says that if you fall off a horse, get right back on.  Quickly, before the fear sets in, before you have time to think.  Great advice, but when I got knocked out on the ski slopes a few weeks ago there was no question of getting back on my skis.  The paramedics took them away from me, and the doctor (and Wally) threatened dire consequences if I didn't rest.  A lot.  So I rested, and I stewed.
I thought about not skiing until next year, but I didn't want to go through the whole summer wondering if I'd lost my nerve, wondering if I'd be too scared to ski.  So last week we went skiing.
At first I was like a little old lady crossing a slippery street on a windy day.  Cautious doesn't begin to cover it.  But I'd rented some hot new skis, and if I wasn't paying attention and driving, I was flat on my rear.  So I skied.  And skied.  And skied.  And I came home with a shiny new pair of skis:

Volkl RTM in case you care.  Rated best by everyone this year, including me.
Happy to have the trauma over, happy to have the mystery solved (as in will I ski again, not as in who did the hit and run) and happy to have had some time in the beautiful mountains. 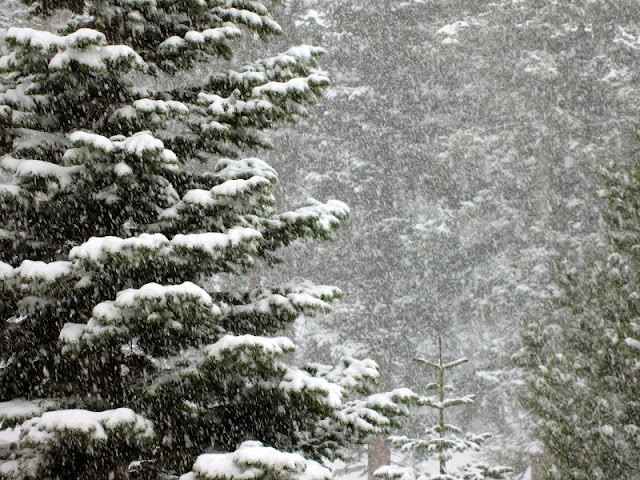 And Wally is happy too. 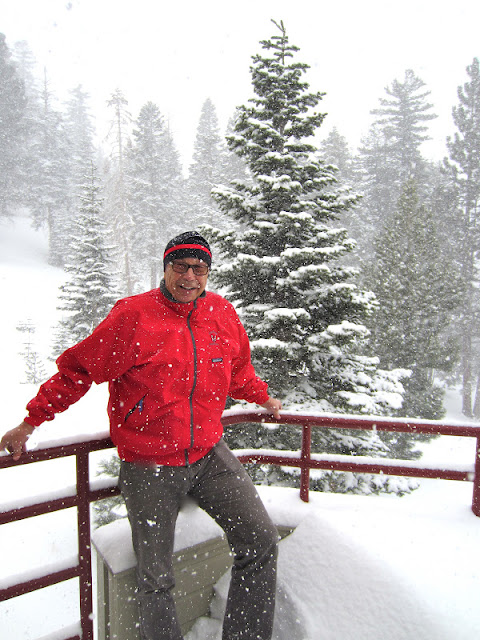 So nice to ski together. Fast. Here's to many more years.
Posted by Postcards From The Hedge at 9:39 PM No comments:

Jan bid on it at a charity auction - a thousand daffodils planted by the best looking and most entertaining firemen in the firehouse. How could she resist?  On a beautiful fall day the ladies lounged in the garden while the firemen dug and sweated and teased each other and planted daffodils.  They marked the one drip line they cut...unfortunately it's not always obvious when you cut the soft drip tubing.  So the first time John turned on the irrigation, it looked like Versailles on a day when all the fountains are running.  Oops. 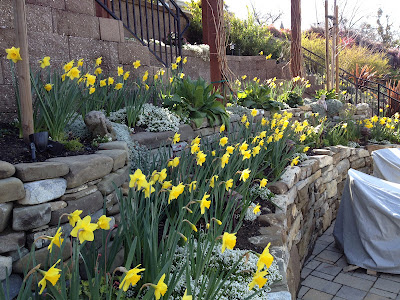 
p.s. Wally has been complaining about the small type - it seems to have gotten smaller lately - anyone else notice this?  Maybe it's just my eyes.

Posted by Postcards From The Hedge at 12:18 PM 1 comment:

A neighbor posted this on Facebook (I know, I know...) and its' too good not to share. And because I know some of you don't do Facebook (hi Aileen!) here it is. Feel free to pass it along. If you can't figure out how to do that, call me. 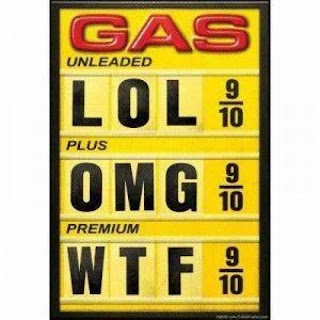 Posted by Postcards From The Hedge at 7:34 AM No comments:

He’s deeply shallow, Michael said as he steered me past the fiction table toward the back of the store.  I had to laugh - words are his business (he owns Rakestraw Books) and my passion and delight (I am a published author and noted big mouth), and that phrase is especially delicious.  And it got me thinking about other clever turns of phrase.
How many times have you thought of just the right comeback...the day after the event?  Or thought of the perfect comeback and held your tongue, only to wish later you’d let it rip?  Of course there is always the famous “She needs a speed-bump installed between her mouth and her brain.” We all know people like that. You need to say the serious stuff with care and respect.  But for those other moments, and there are so many of those other moments, here are some inspirations:
Groucho Marx said "I've had a perfectly wonderful evening. But this wasn't it." Go Groucho.
Forrest Tucker: "He loves nature in spite of what it did to him." I bet you've dated this guy.
Oscar Wilde: "Some cause happiness wherever they go; others, whenever they go." And yet somehow they linger and linger...
And for that argumentative yet clueless person: "He uses statistics as a drunken man uses lamp-posts... for support rather than illumination." Andrew Lang
When Eric was visiting a few weeks ago he read us our horoscopes in the morning, and we decided to do horror-scopes and mis-fortune cookies.  Now remember this is all in fun, and try not to get your panties in a bunch.
1. You are the conversational equivalent of spam.
2. Work on your social skills - or is it is possible to work on something you don’t have?
3. Your cat is cheating on you.
4. That shirt? with those pants? Is your taste really all in your mouth?
5. They lied. It is you.
6. I love what you’re trying to do with your hair.
7. Focus your energies on becoming a more positive person - even your therapist is sick of listening to you whine.
8. Your search for old friends and long lost loves isn’t going to work out - they’re all busy changing their email and Facebook accounts to avoid you.
9. If you’ve changed your Facebook status more than three times, your real status is unstable.
And just in case we still need a reminder:
10. Being on Facebook is not a real life.
Posted by Postcards From The Hedge at 7:00 PM No comments:

Wouldn't this be a great place to start the day? The cheery yellow, the crisp blue and white, the lemon trees, the clever mix of patterns...and I love the window.  I don't think you can call them curtains, or drapes.  I guess this is why the term window treatment got invented. 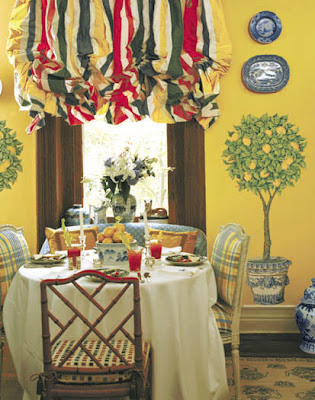 I have an unfortunate bathroom. Not far from the front door, near the kitchen, around the corner from the dining room. You see it as you walk between rooms, and the commode is in plain sight.
Friends have suggested "Close the door".  But that makes the hall dark and gloomy.
"Reverse the door".   Then you'd have to shimmy into the bathroom, and you couldn't get to the sink.  It's a small bathroom, really.
"Hang a curtain from the ceiling. Between the commode and the sink. You can tie it back, you can gather it, you can have fun with it."  Brilliant.  Thank you Cathy.  Now if you'll excuse me I'm off to the Scalamandre website to see about getting yards and yards of this fabric.  I think I'll do the window, too while I'm at it.
And what are your rainy day dreams?
Posted by Postcards From The Hedge at 10:29 AM No comments: