Okay, so these are the caramels I blogged about, the ones that don't scare me any more, the ones I served at our Christmas party last night.  The ones you all ate - not a one left.  Huge hit.  Happy hosts.

The best parties are when all the food gets devoured with smiles and requests for recipes, when you actually get to talk to people, and when a few friends linger for the after-party, sending you go to bed completely worn out with a big smile on your face.  And when you wake up to chests and tables laden with hostess gifts, and an email note from a friend, "Oh, I forgot and put chocolate under the tree - please go get it before the dog discovers it."  I was sooooooooo tempted to write back, "Chocolate gone.  Dog dead."  but altho I think wicked thoughts I seldom act on them.  Plus I really like this dog...and this friend.

DO AHEAD: Caramels can be made 2 weeks ahead. Store wrapped tightly in plastic in airtight container at room temperature.
Posted by Postcards From The Hedge at 9:06 PM No comments:

I know, I know, it's not the new year yet, and resolutions are supposed to be for things you'll change next year, but I am starting a new tradition, and I'm inviting you to join me.  I'm celebrating the things I learned, the fears I overcame - this year.   More fun, less guilt than New Year's resolutions.  Invite your friends.


1.  This year I learned the words to Adeste Fidelis - in Latin.  Remember what George Carlin said about this song? *

2.  How to caramelize sugar.  I was okay if there was some butter mixed in, but straight sugar scared me. Now, you would think a girl who makes her own potato chips and butter toffee and the fried chicken from Ad Hoc (two days.  three people. worth every minute.) wouldn't be afraid of much.  You would be wrong.  But I've been making Bourbon Sea Salt Caramels, and I'm not afraid any more.

3.  Replace things that need replacing, even if they're not worn out. Like the candy thermometer someone (ahem!) scrubbed all that caramelized sugar off...and all the numbers.  Soak, please - don't scrub.  A candy thermometer without numbers may not be worn out, but it's not much use. Squinting at the shadows left by the scrubbed-off numbers, trying to dodge the little pops of blistering hot caramel from the pot, I decided it's time.

And the microplane grater that's dull.  No more skinned knuckles for me.  The spatulas with nicks and dings in the blade (from trying to get the last bits out of the Cuisinart).  The garlic press that is now missing its little plastic clean-out thingie - Ally had a great snack; I have a new garlic press in my future.

4.  Playing the piano - again.  It was harder than I expected, and I'm glad I'm hanging in.  Come by just before midnight, and most nights you can hear me practicing.

5.  Don't attend every argument you're invited to.  And as Robert Brandt said, "Life becomes easier when you learn to accept the apology you never got."  I would not have understood last year, but I do now.


* George Carlin famously said "Oh Come All Ye Faithful is the only Christmas Carol to successfully combine sex and religion".   Go George!
Posted by Postcards From The Hedge at 10:16 PM 1 comment:

Words To Live By

Fight. Love. Live.   The origin of Filoli, the incredible estate on the peninsula.  If you haven't been for a while, go.  For the Christmas extravaganza, for the winter bones.  For tulips and daffodils in the spring. Then join.  Or volunteer, and you too can become (as an old classmate once said) one of the crumbs of the upper crust.

We went to see the house decked out for Christmas.   In the cold winter light the entry was awe inspiring, grand to the point of intimidation.   I wondered what it was like when Lurline Matson Roth lived here... 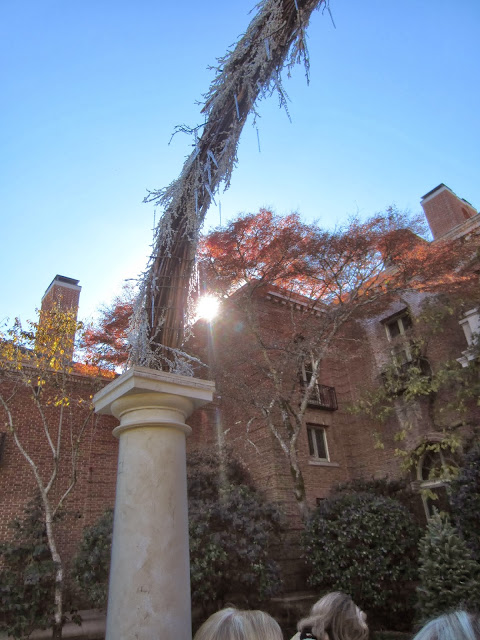 There were bunnies on the chandeliers: 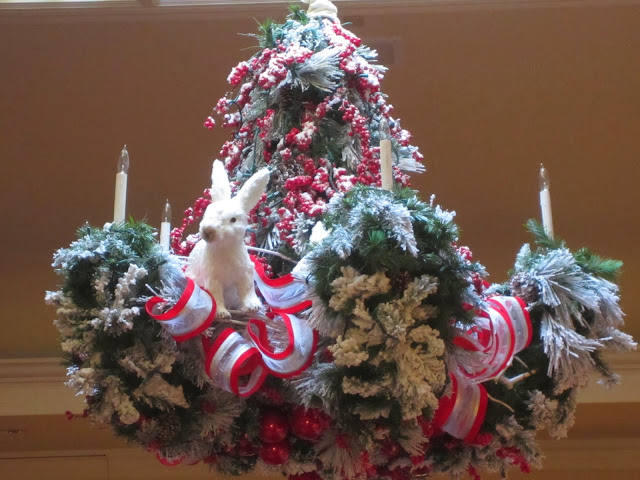 and carolers on the stairs.  Lots of carolers. 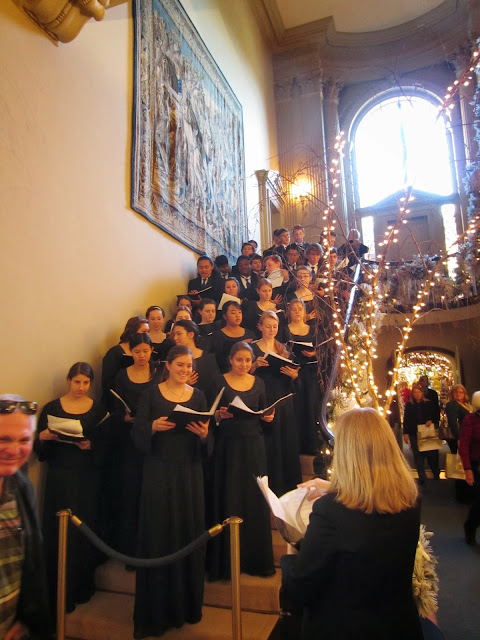 Trees crowded with ornaments, all for sale.  Look for the moose when you come to visit me. 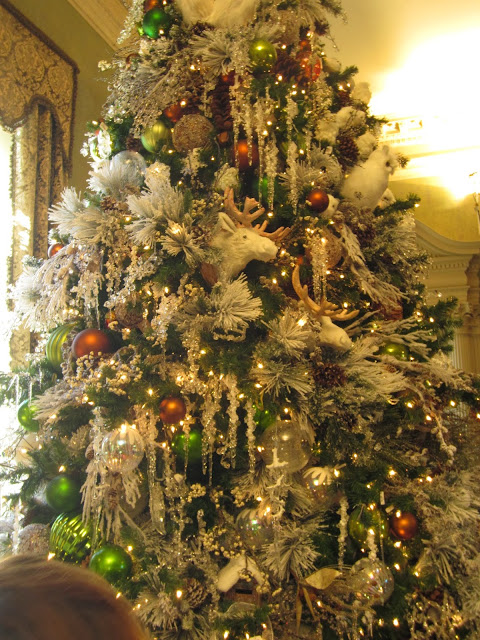 Hint:  He's not anyplace you'd expect.  Keep looking.  Have another drink.  And no, he's not in a cupboard.  Or closet.  With apologies to those who are.

Penguins and polar bears, and stunning black and white ribbons. Sold out, of course.  If you see this ribbon for sale, call me. 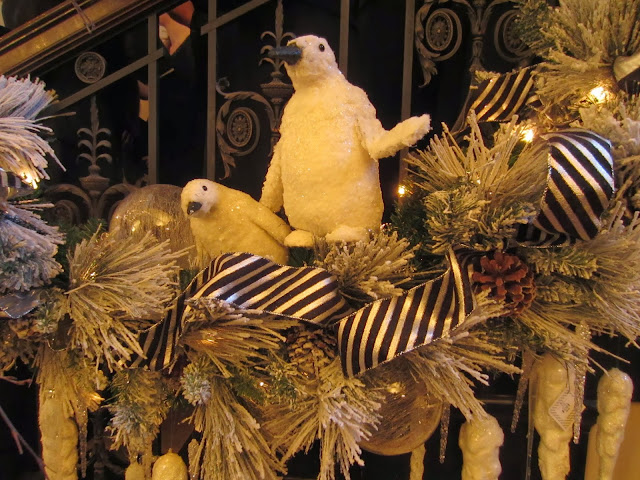 Black is the new black.  With apologies to orange.

There were tables laden with candles and silver, ornaments and objects of desire. 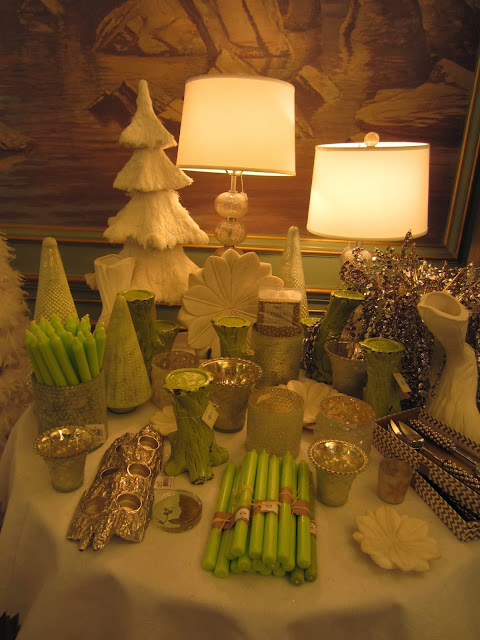 And in the garden, a peacock named Percy. 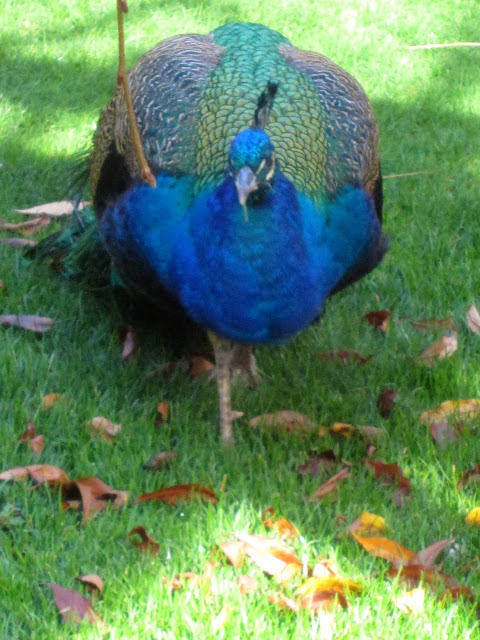 When I was growing up (and up and up, but that's another story) White Gate Farm was still a farm.  With sheep, and peacocks as guard dogs - no coyote ever got past them.  We used to hitch Campy, the neighbor's pony, to his circus cart with a red leather seat, and ride up the long gravel drive to ask if we could pick up peacock feathers.  Mrs Donohue, always pale and wan in a housecoat, alway gracious, always said yes.

We would listen to the peacocks sound the alarm, and being a wicked mimic I learned to imitate their cries.  So when the docent said Percy was lonely and in search of a mate, I asked if I could talk to him.  I got a weird look, and a "You could try...." Resounding vote of No Confidence.  Wrong thing to do to me.

So I tipped back my head and called, in my best peacock, "Help!" which is pretty much what peacock sounds like if you're not a peacock.  And much to the docent's surprise, Percy perked up and came looking for me.  With a gleam in his eye.

Much later, as we left the check-out area loaded down with bags and boxes, there was a group of docents taking a break, drinking tea and basking in the weak winter sun.  And I heard a familiar docent-y voice say to his friends "Say, did you know she speaks peacock?"

So helpful for those of you who've been trying to figure out what language I speak.

Posted by Postcards From The Hedge at 10:43 PM No comments:

The Old Curiosity Shop, or Fall Flowers at Loot

It's impossible to pass these windows without stopping - they pull you in.  Skinny young men with fierce looking dogs, old men bundled in overcoats - they all stop to look.  They peer at the antique chairs piled with ornaments, at the orange Christmas tree made of piled-up Hermes boxes.  At pale chests covered  with blue and white china. 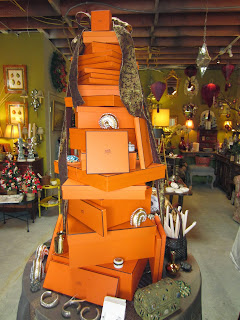 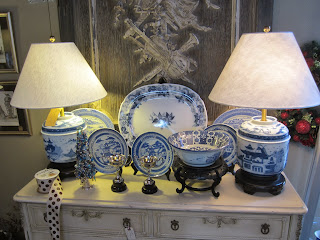 They wander in and turn around in amazement.  They move toward a gilded pine cone, an old hunting lamp.  A framed print of  a brightly colored bird, a painting of an old cottage in a richly gilded frame.

There are shells crusted in jewels, branches dangling bright ornaments. 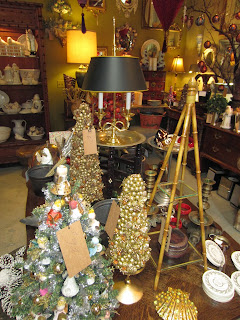 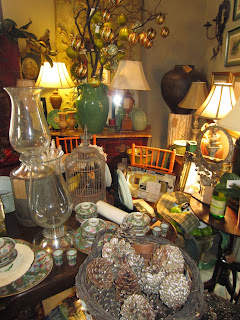 And there is a ceiling festooned with whimsey.  I'm going to Loot. 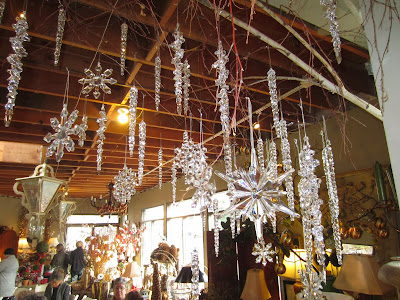 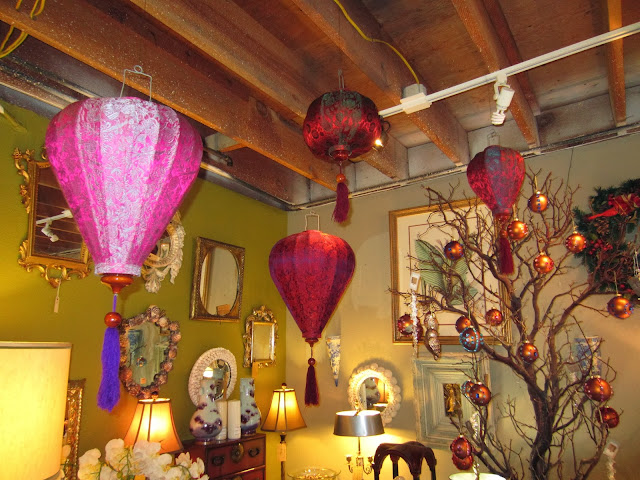 See you there.
Posted by Postcards From The Hedge at 1:48 PM No comments: