Worried about her absentmindedness sliding into Alzheimer's, the family kept an eye on her.  Sometimes she seemed fine, sometimes confused about where she was, or why she was there.  But she was still mostly lucid, just forgetful.

Since it was Thanksgiving there were plenty of family members to help keep track, but in the kerfuffle of getting the turkey carved and the cranberries sauced, the sweet potatoes sweetened and the green beans greened, it was all hands on deck and there was no one to watch her.

Tim, ever resourceful, led her to a large framed photo in the bookcase of the whole family at last summer's reunion at the lake, thinking it would keep her entertained.  And she seemed happy, talking away.

When the turkey was carved and the dinner on the table she was still there, still chatting briskly away.  Concerned heads peeked around the dining room door, then retreated to the kitchen to discuss in whispers what to do.  Finally, concerned over both the rapidly cooling dinner and the lively one-sided conversation, Tim walked up and tipped the photo face down on the bookshelf.   "Come on mom, let's eat."

She looked brightly up at Tim and said "Thank Goodness!  I thought they'd never leave!"

There are moments of grace in the midst of the worst times.  But I know this: I want to go with all my marbles, not confused and afraid.  I'm not sure I have much choice, but I have good genes and I pay attention to what the researchers say might be helpful. Covering all the bases.

Do math in your head.  There's no one watching, and there's no test.  So what if you get it wrong?  Eventually you'll get it right.

Figure out the tip without using your phone (hint: double the amount of the bill, then drop a zero.  That's twenty percent.  Don't be cheap.)

Take a foreign language, and be prepared to feel ridiculous.  Learn to laugh at your self.  Don't quit.  So what if you're the worst in the class?  It's not going to affect your GPA.

Try the jumble, work a crossword (another hint: they get easier). Play the piano, play the kazoo.  Carry a small notebook and write down things that make you smile, things that make you think. Carry a sketchbook.  Write a story.  Start a blog. Write letters to your friends.   Do something to stretch your mind.  Push the envelope.  Push back.

Posted by Postcards From The Hedge at 10:50 PM No comments:

One hot summer day (remember those?) a crowd of neighborhood kids rang my doorbell.  They were so excited they writhed on the doorstep, flowing over each other with excitement.

"There's a dead bird!  On the neighbors' lawn!"  Shrill voices rose and fell, talking over each other and arguing the finer points of dead bird-ism.

I'm not sure if I remember what it's like to be a kid, or if I am still that same person I was as a kid, but I have lots of friends in single digits (and some friends nearing triple digits, but that's another story). These kids knew something needed to be done, and they knew where to come.

"We need to bury it!  We need a box!"  There is no urgency like the urgency of a child.

In the garage, on top of the fridge was a pile of boxes I had been saving to wrap presents.  I picked out a box big enough to hold four truffles.  Or one bird.  Or so I thought.

"Nope.  Not big enough."  I looked around - hyperbole is as common as skinned knees among the under-ten set.  All heads were nodding, all faces were solemn.  Okay, a bigger box.

I picked out another box, this one half the size of a shoebox. Nope. My Jimmy Choo shoe box?  Still too small. Really?  But they finally selected a bigger shoe box, the one Wally's sneakers came in.

I headed for Maneesha's lawn thinking pteryodactyl.  I mean, how big can a dead bird be?  We live in the suburbs, not the north woods, and I am used to seeing goldfinches at my feeder, and shy bushtits flitting away when I open the back door.  Little birds, not birds the size of men's sneakers.

It was a pigeon, not recently dead, with gashes from a hawk or other bigger meat-eating bird (and remember that when you look at that turkey).  Wasps were already swarming around.  And it was big.  Definitely sneaker size.

Being a veteran of several prior dead bird adventures I had brought a pair of sturdy leather gloves.  I mean if we're worried about salmonella in our supermarket chicken, just think what's winging around with the pigeons.  Especially the dead ones.

Freaked out by the wasps, and egged on by each other's screaming, the decibels rose to Hitchcock film  level as I dropped the buzzing pigeon in the box and smacked on the lid.  We sat down and had an impromptu session on the benefits of nature's scavengers, the garbage collectors of the natural world, and on how annoying screaming is to everyone except the person screaming.  Then it was off to find a burial site.

So where to bury a slightly decomposed pigeon?  "The most beautiful place in the world" said Daisy.  Nods all around.  And since Agra and the Taj Mahal were too far away, where would they recommend?

"Your Garden!" they all yelled.  So a dozen kids swarmed my garden like wasps on a dead pigeon, looking for the perfect Final Resting Place.  They finally agreed on a spot just below a deep blue hydrangea, shaded by an ancient buckeye.  I dug a big hole, stuck in the box, and started covering it.

"Wait!" Daisy screamed.  "We need a funeral."  Beyond my pay grade.  Especially a pigeon funeral.  I mean, what do you say?  Sorry you're dead but at least now you can't crap on my head?  Or whirl into flight right in front of me and scare the crap out of me?

"He needs a name.  We can't have a funeral without a name."  There went my idea for the Tomb of the Unknown Pigeon.  Oh well.

"Fluffy.  His name is Fluffy."  With apologies to bunnies everywhere, we said goodbye and good luck to Fluffy the Pigeon, tucked him in under the hydrangea deeply enough to discourage the raccoons, shed a few tears, and then all trooped off for cookies.  It's not a real funeral unless there is food.

As I'm going thru my stack of boxes looking for the right size for the gift I'm wrapping, I think of that pigeon.  And I cannot look at a naked bird (think turkey here) without thinking of the avian funeral.

There is a book, now long out of print, called Blinkie The Friendly Hen.  By Jeffrey Vallance, an artist who pushes the envelope.  It is truly food for thought.  But you might want to wait until after Thanksgiving.


Posted by Postcards From The Hedge at 10:21 PM No comments: 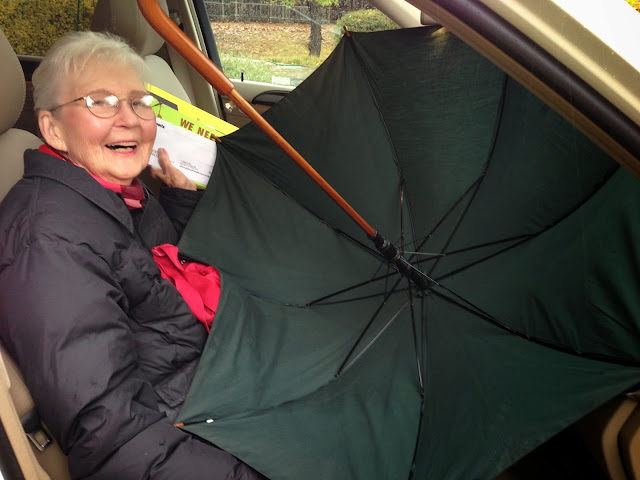 it's important to open it outside the car.

It's also important to laugh.  Thanks mommy.  I have so much fun with you!
Posted by Postcards From The Hedge at 5:15 PM No comments:

He paints in his garage.  He's in a bunch of well-known museums and collections.  We were lucky enough to buy a painting before they climbed out of our price range.  For him painting is as necessary as breathing.  His name is Joe Loria - check him out. 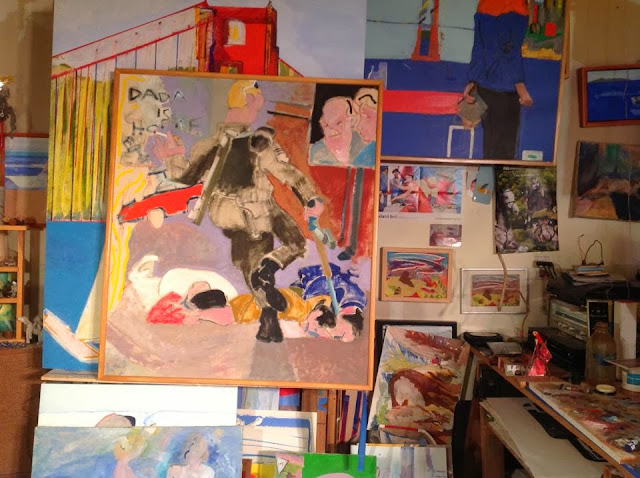 I thought about him as I was sketching.  I've been thinking a lot about the need to create.

I had a gift tag craft day at my house... 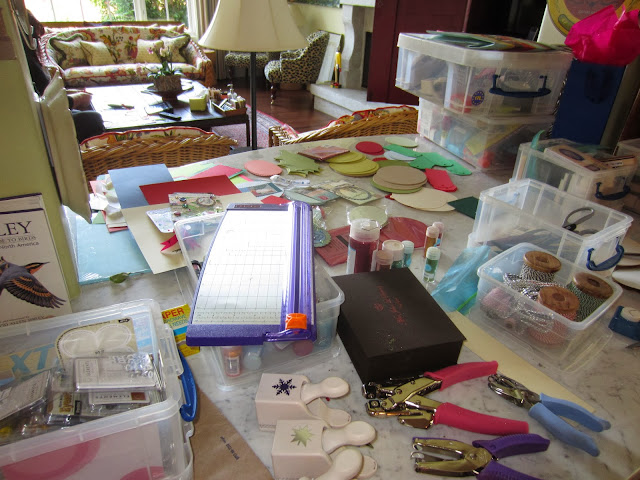 Friends came, brought lunch to share, glittered and stickled and laughed and amazed me with their creativity. 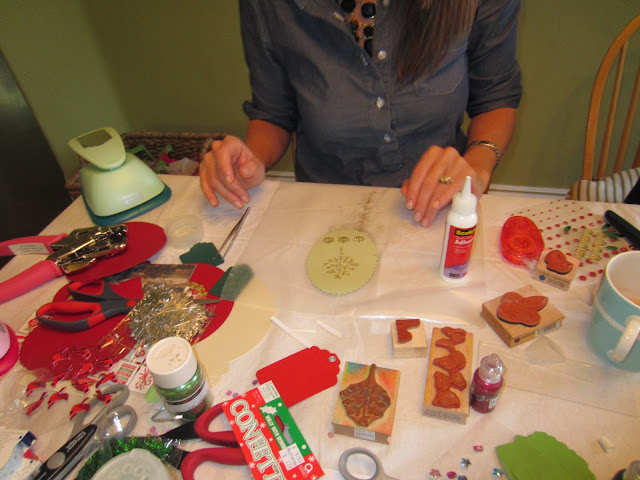 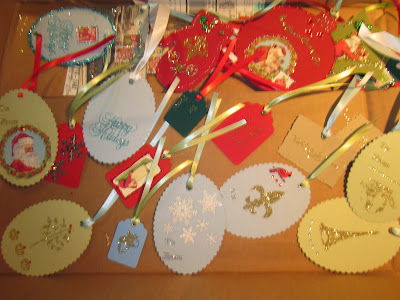 Especially the ones (hello Ellen) who said they were not creative, and then made the most beautiful and unusual things.  (I took notes.) 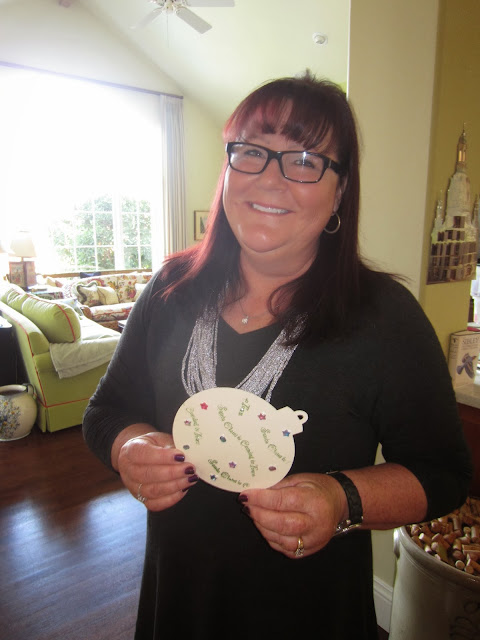 It's worth a closer look: 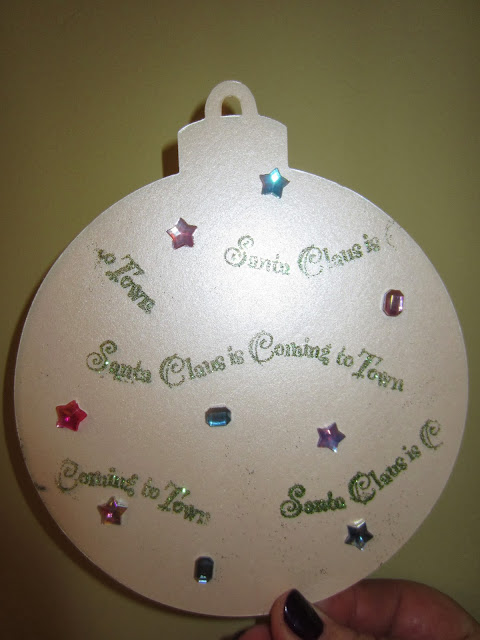 I have a pile of gift tags, I am covered in glitter, and I have a kitchen (and a head) full of happy memories.

So when you get a beautiful hand-made gift tag from a friend, I hope you'll save it.   A lot of love and heart went into making it.

Posted by Postcards From The Hedge at 3:12 PM No comments: