Shane Connolly is Irish, and the darling of the London flower world.  He's  Prince Charles' flower arranger, did the flowers for his wedding to Camilla.

Ron Morgan is the toast of American garden clubs (and mothers and brides everywhere), jetting across the country lecturing and charming and getting daughters married off in style (sometimes for the second or third time).

Yesterday they were on stage together at Bouquets To Art, lecturing and arranging side by side. Very different styles, and besides being fabulous and inspiring they were hysterically funny.

Ron had an upside-down Corinthian capital and gold leafed barnacles to start with.  Shane: "I didn't know Liberace was in the Navy..."

Ron brought a fabulous twisted branch from a Camperdown Elm, a very slow growing tree, and said "I'm pretty sure this came from the Midnight Supply Company."  Think about it.  If you're missing a Camperdown Elm... 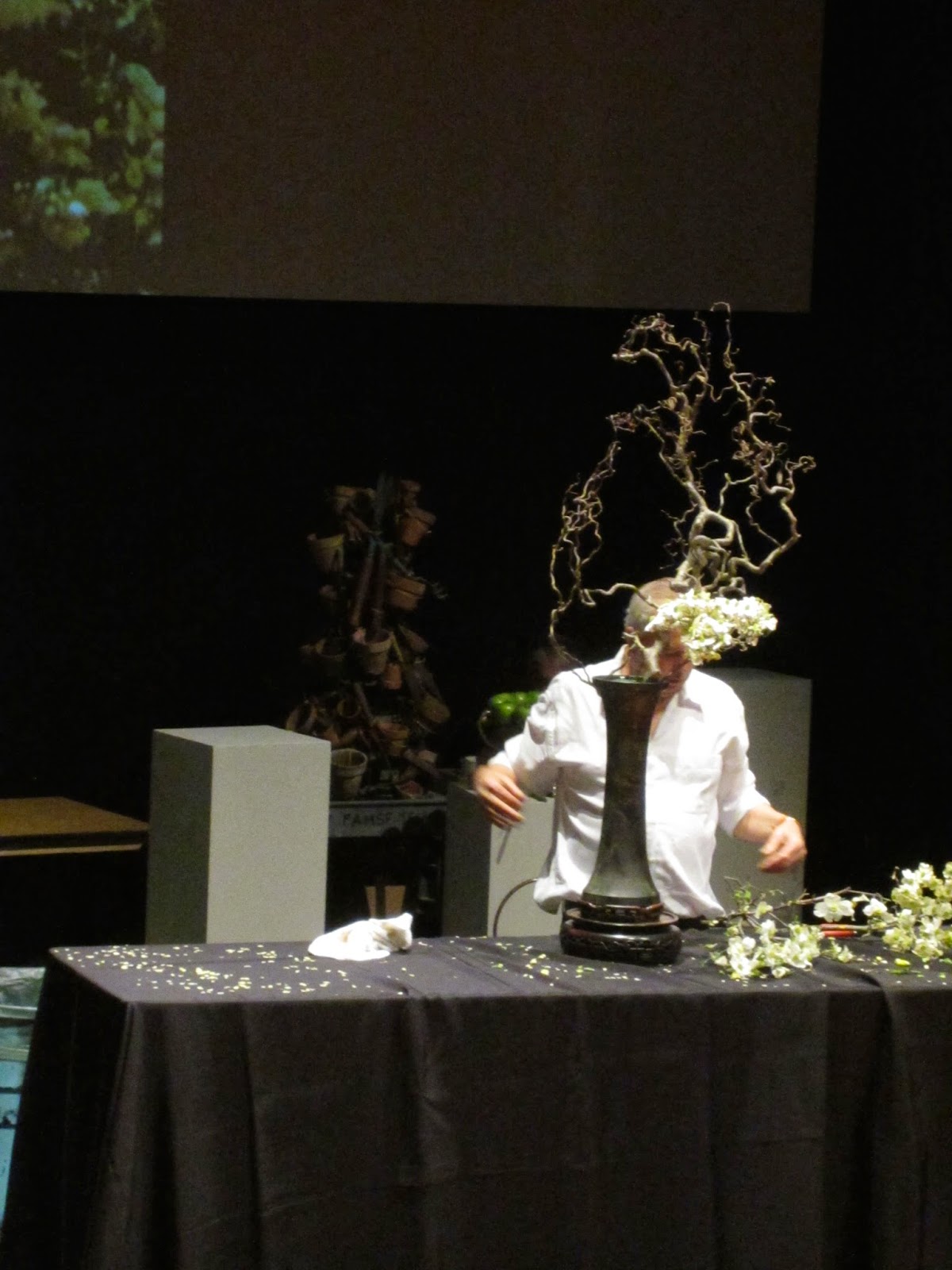 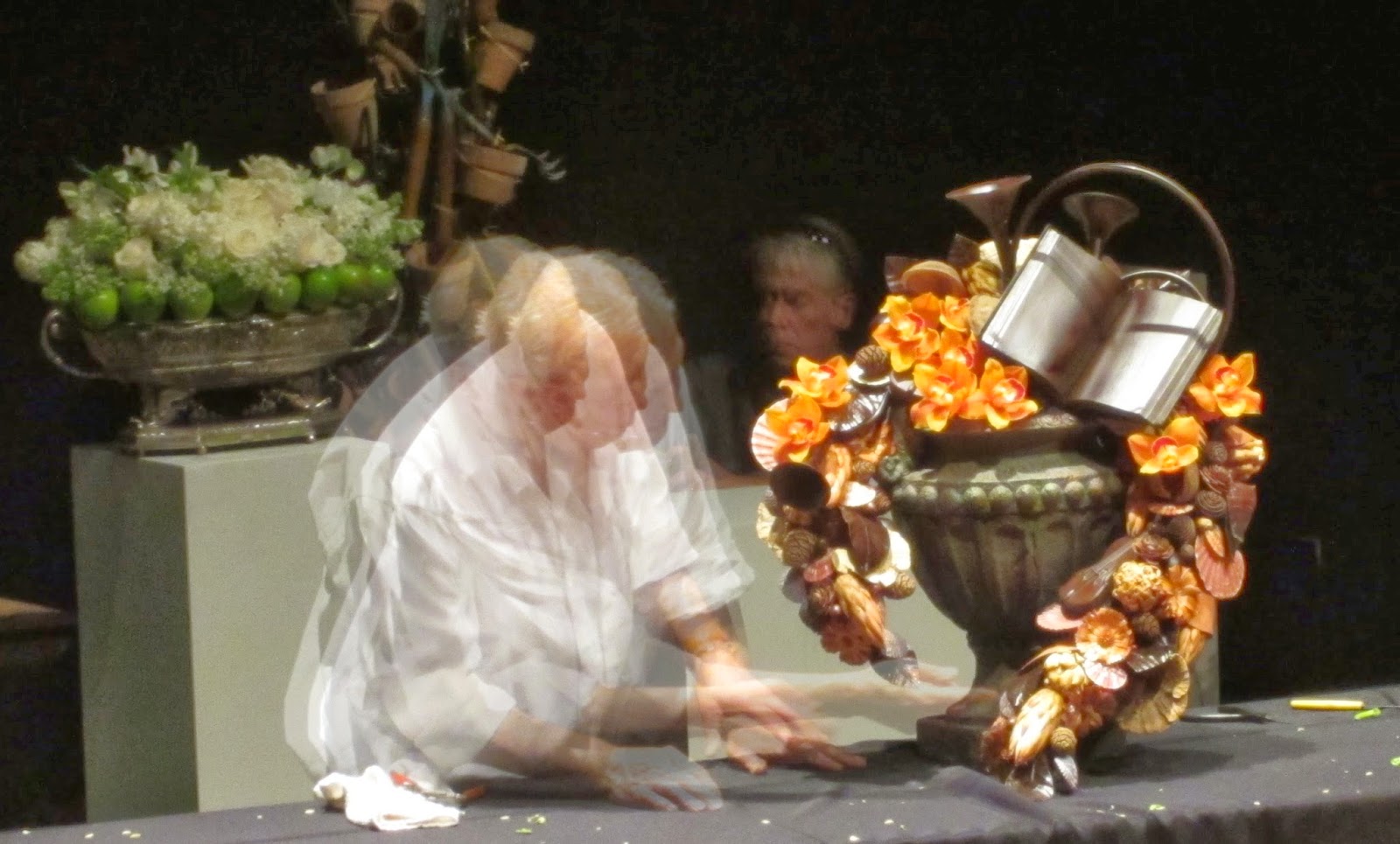 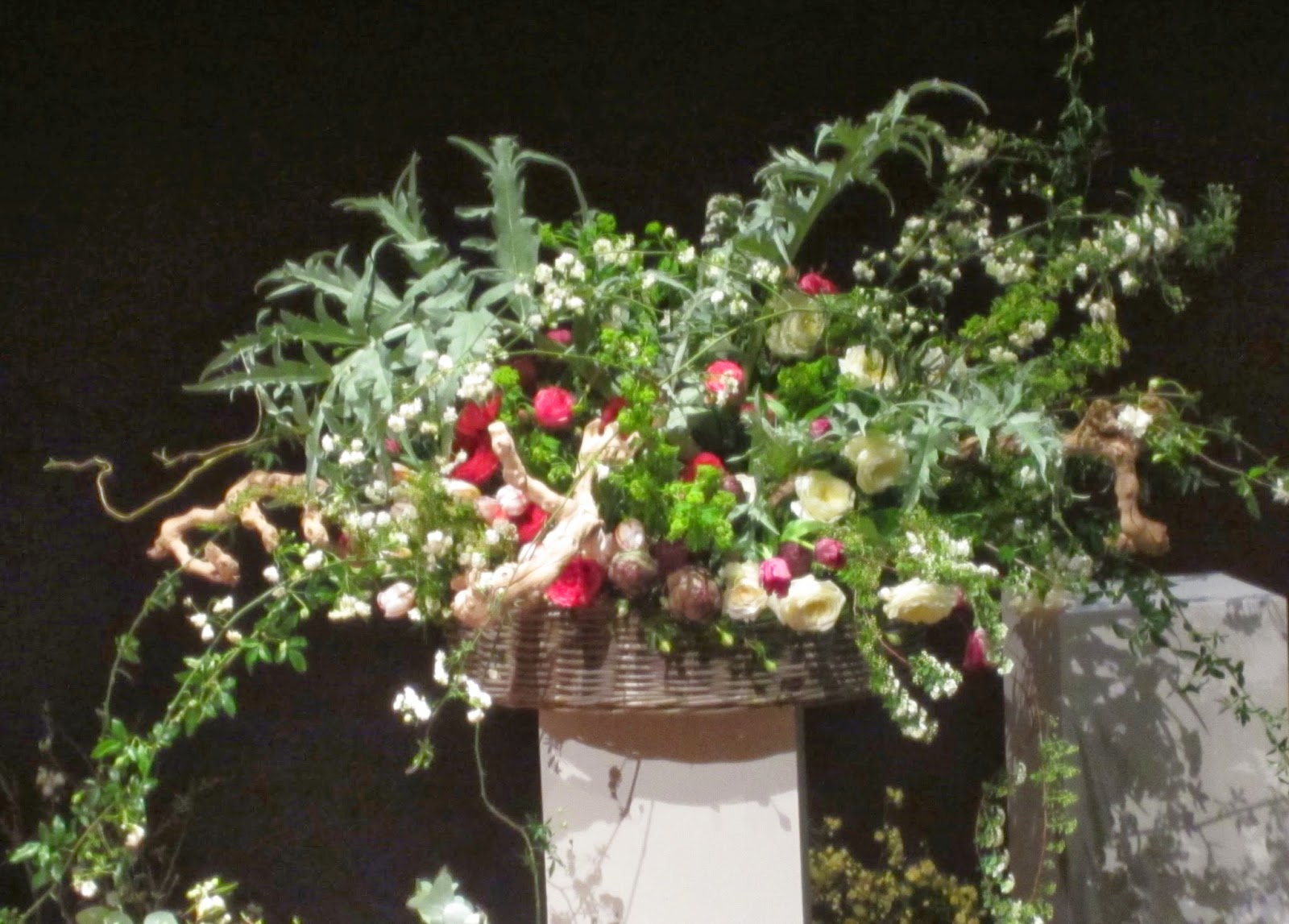 So different, both spectacular.

They did Chinoiserie, and English Country House Party, Ron facing the audience: 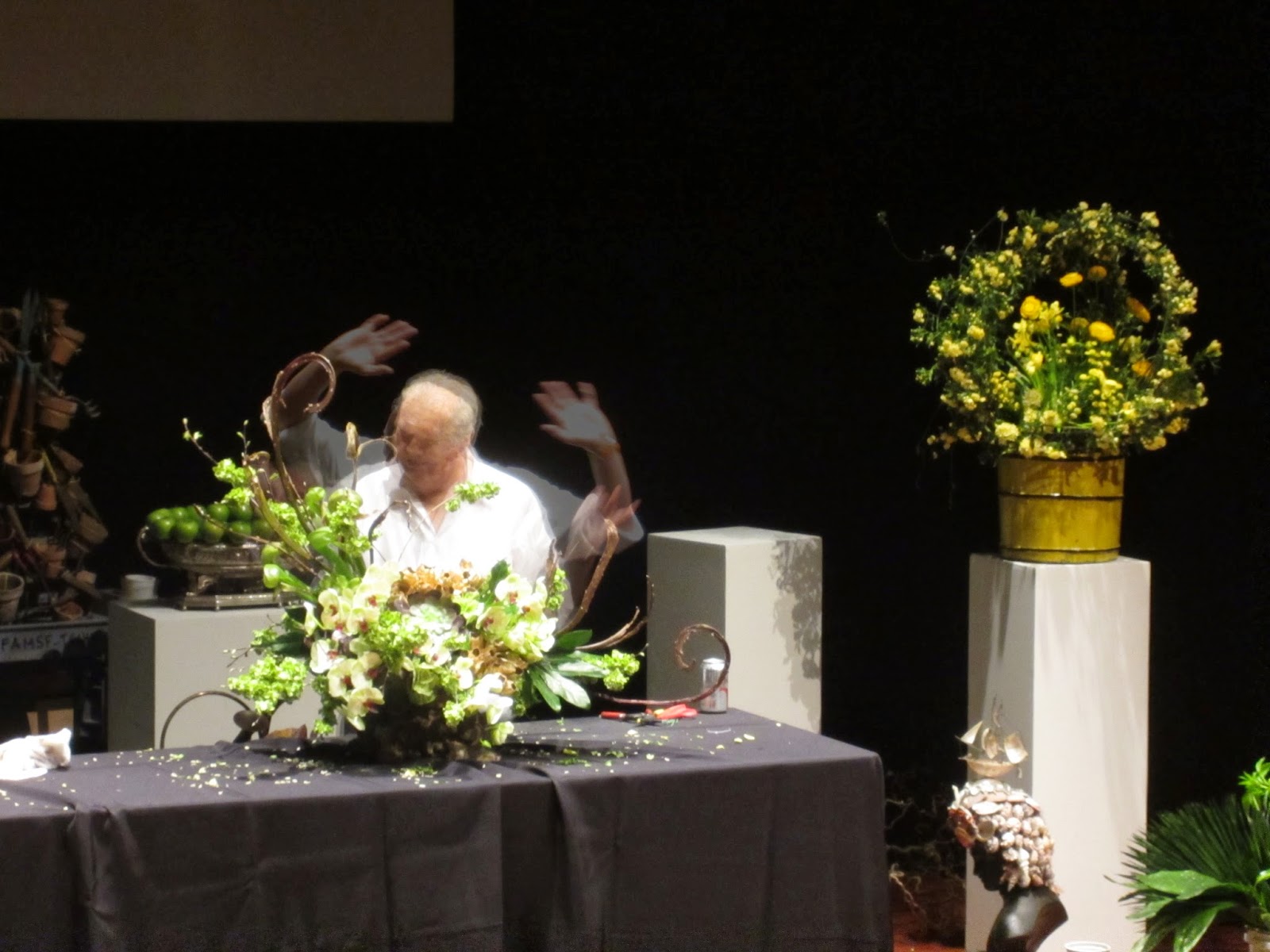 Shane wandering around his arrangement. 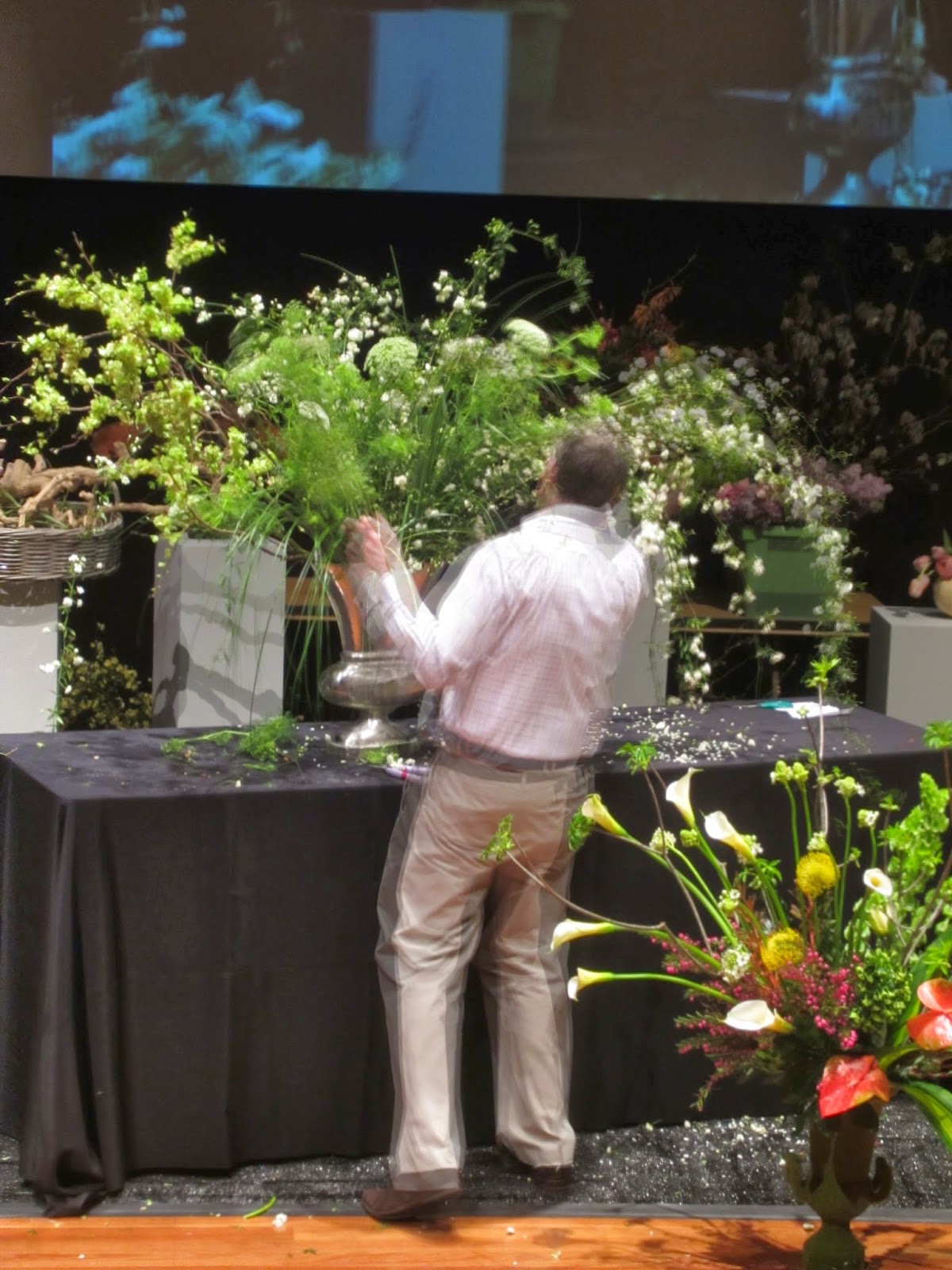 Both keeping up a steady stream of advice and gentle insults. 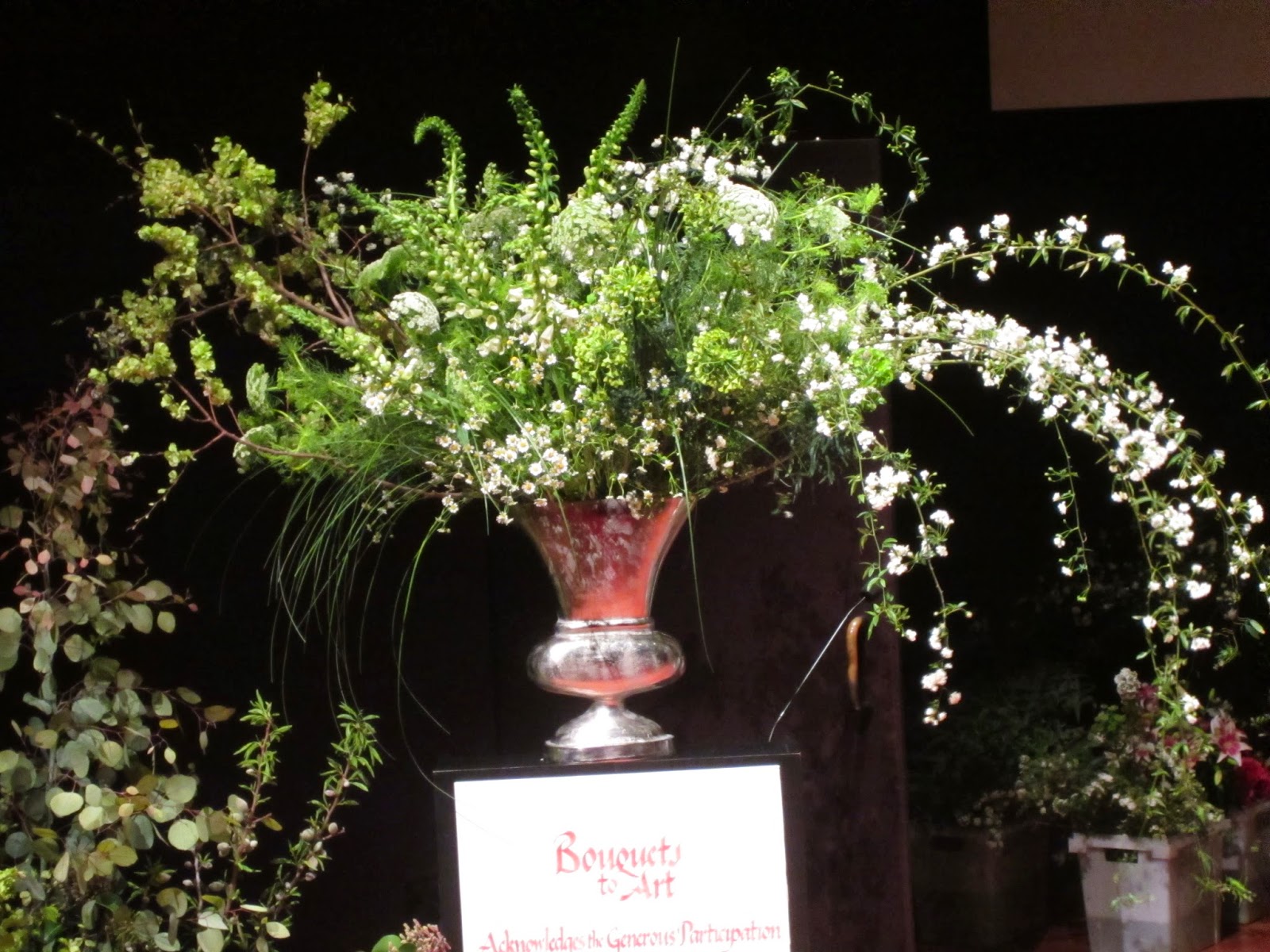 There was a lively discussion of the correct height of an arrangement for a dinner party.  Shane said "The English find it rude to talk across the table.  You're supposed to talk to the person on your right, then when the table turns, to the person to your left." That's advice for the gentlemen.  If everybody spoke to the person on their right, the dinner table would look like a conga line. 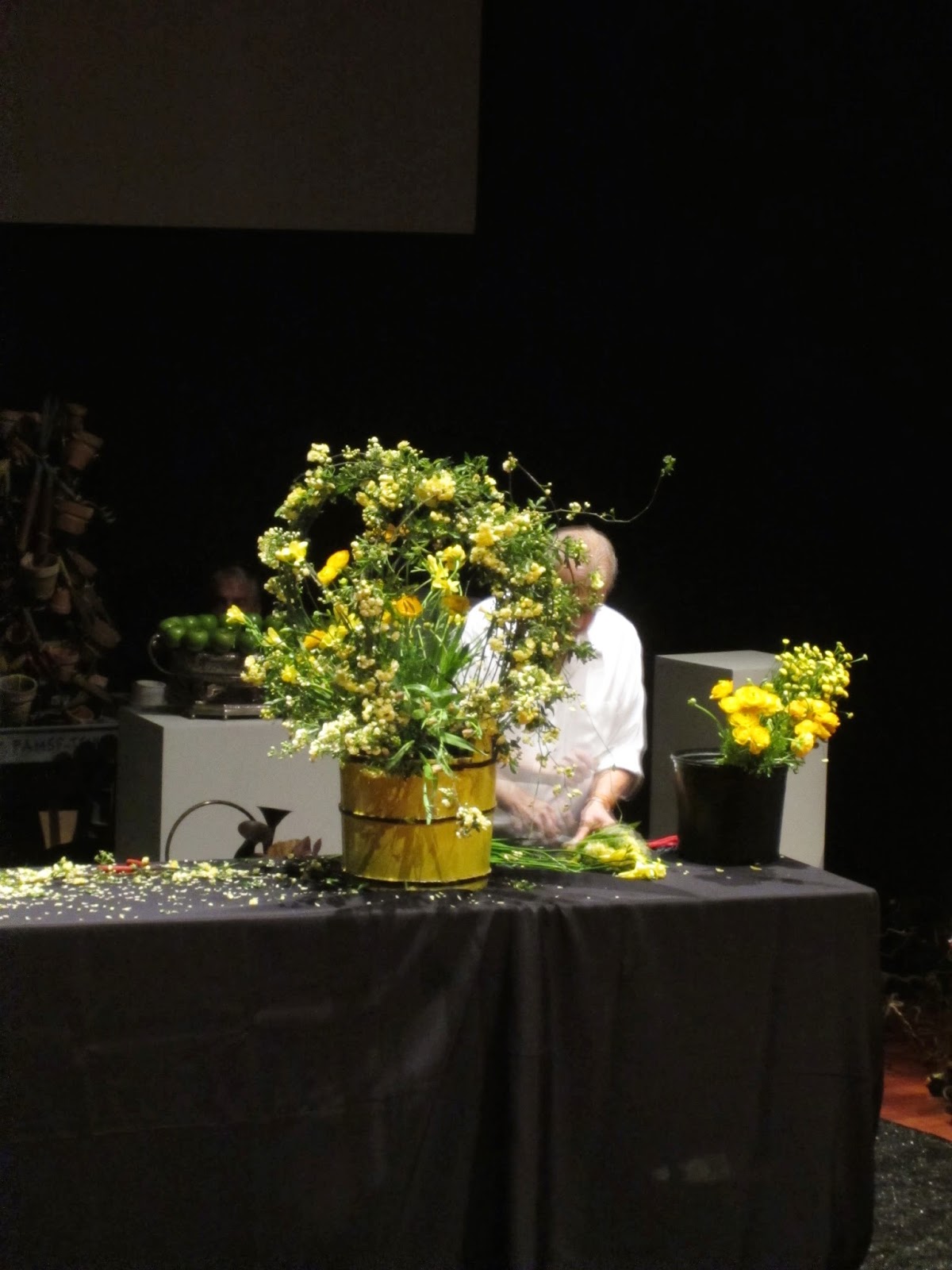 Ron said "This is my interpretation of..." and groaned when he tried to move the arrangement.

"Childbirth, by the sound of it." Shane shot off.

Ron place a spray of trembling orchids in his Chinoiserie arrangement and said "Look at how they move!  Just like fish swimming thru the arrangement!"  Shane asked "Do you write Fairy tales in your spare time?"

"So when did your self doubt start materializing?" Shane asked.

Ron cocked his head and said "About five minutes ago." 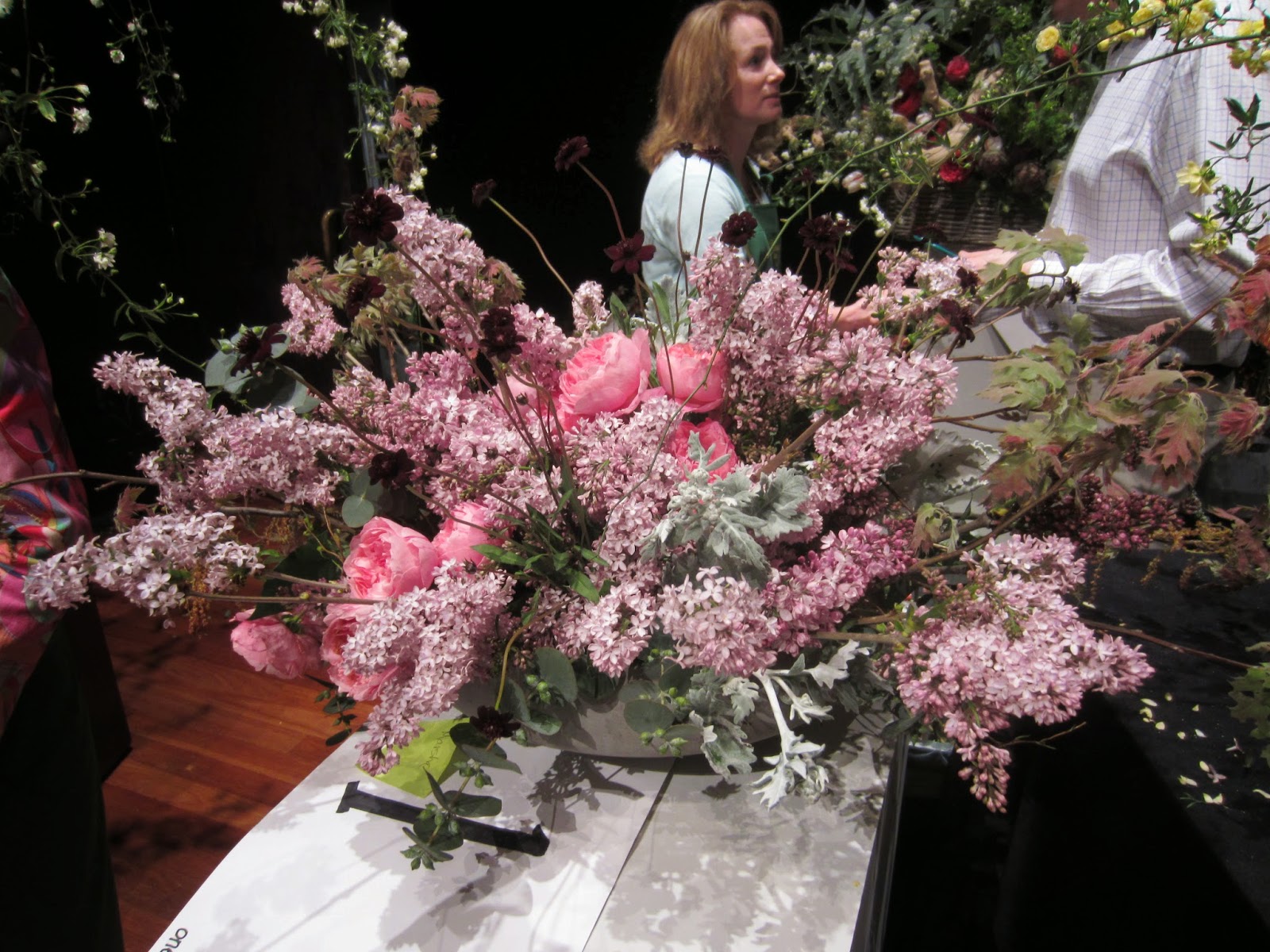 Shane's style is loose, no oasis.  Ron's is controlled, every flower knows who's boss.  So different, both fabulous.  And inspiring.

There were many more stories - Ron:  "Years ago the Garden Club ladies had chosen a rose to be named for Eleanor Roosevelt, and when Mrs. Roosevelt saw the description of the rose: 'Not good in beds, great against the wall' she declined the honor."

Shane: "There was a man who had a plant named after him.  Some little grey wrinkly leaved thing.  When his wife saw it, she said "Oh honey, that's perfect!"

And of course there were the Bouquets To Art themselves  Winter: 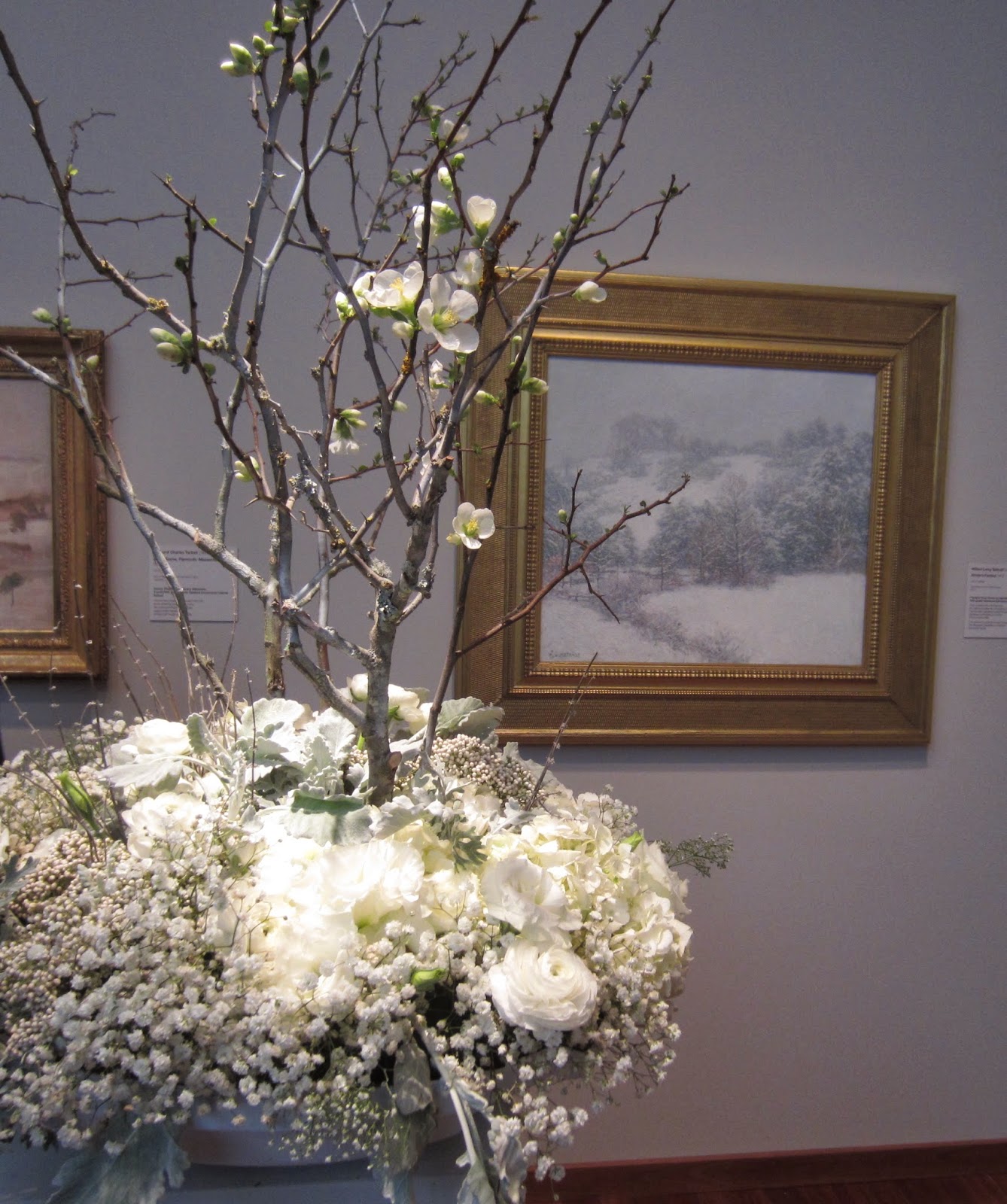 (note the painting being interpreted just behind) 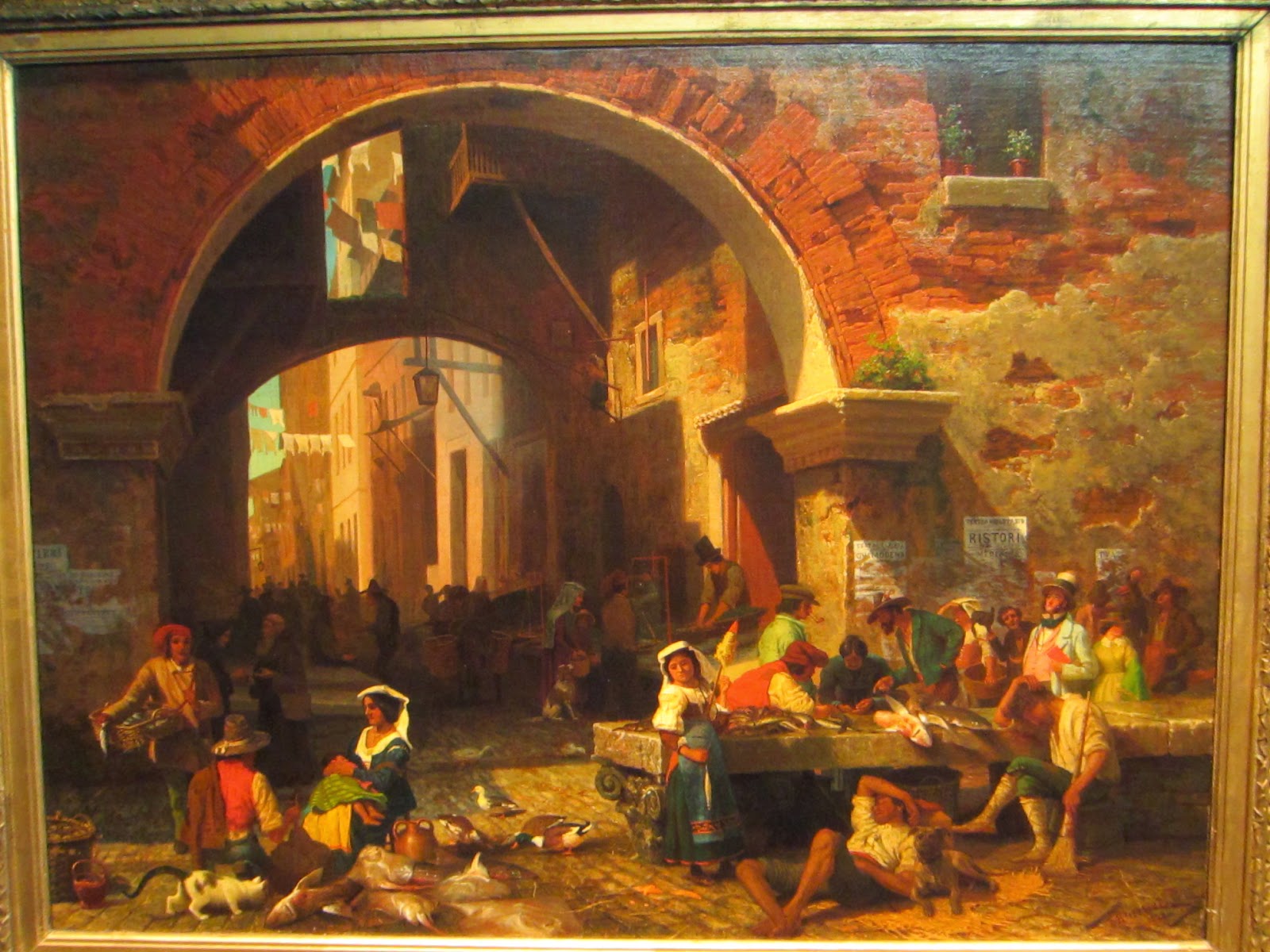 And her amazing arrangement.  I would have no idea where to start, she nailed it.  Even if it wasn't near the painting you would know to which painting it belonged. 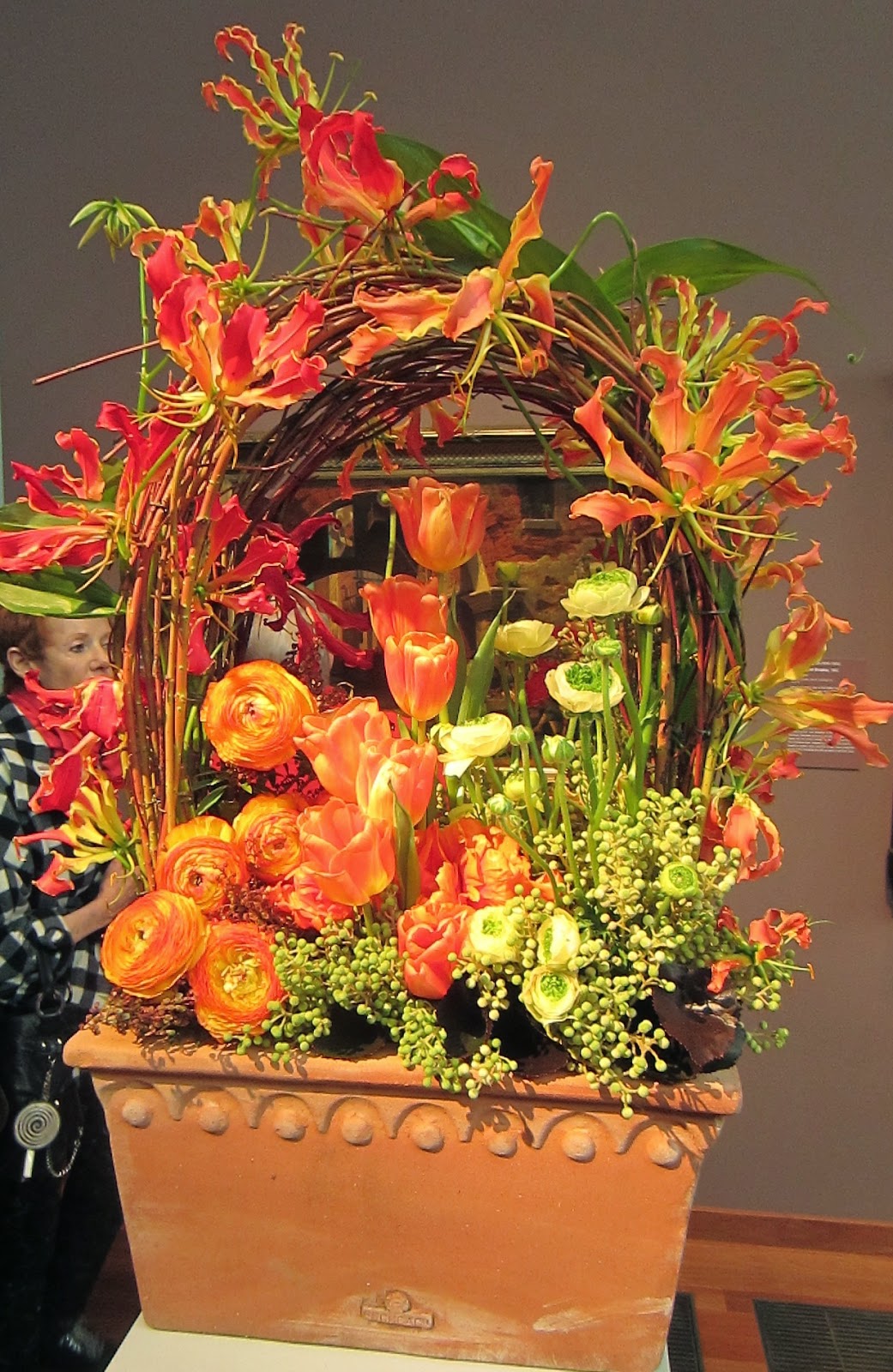 There was some wild stuff: 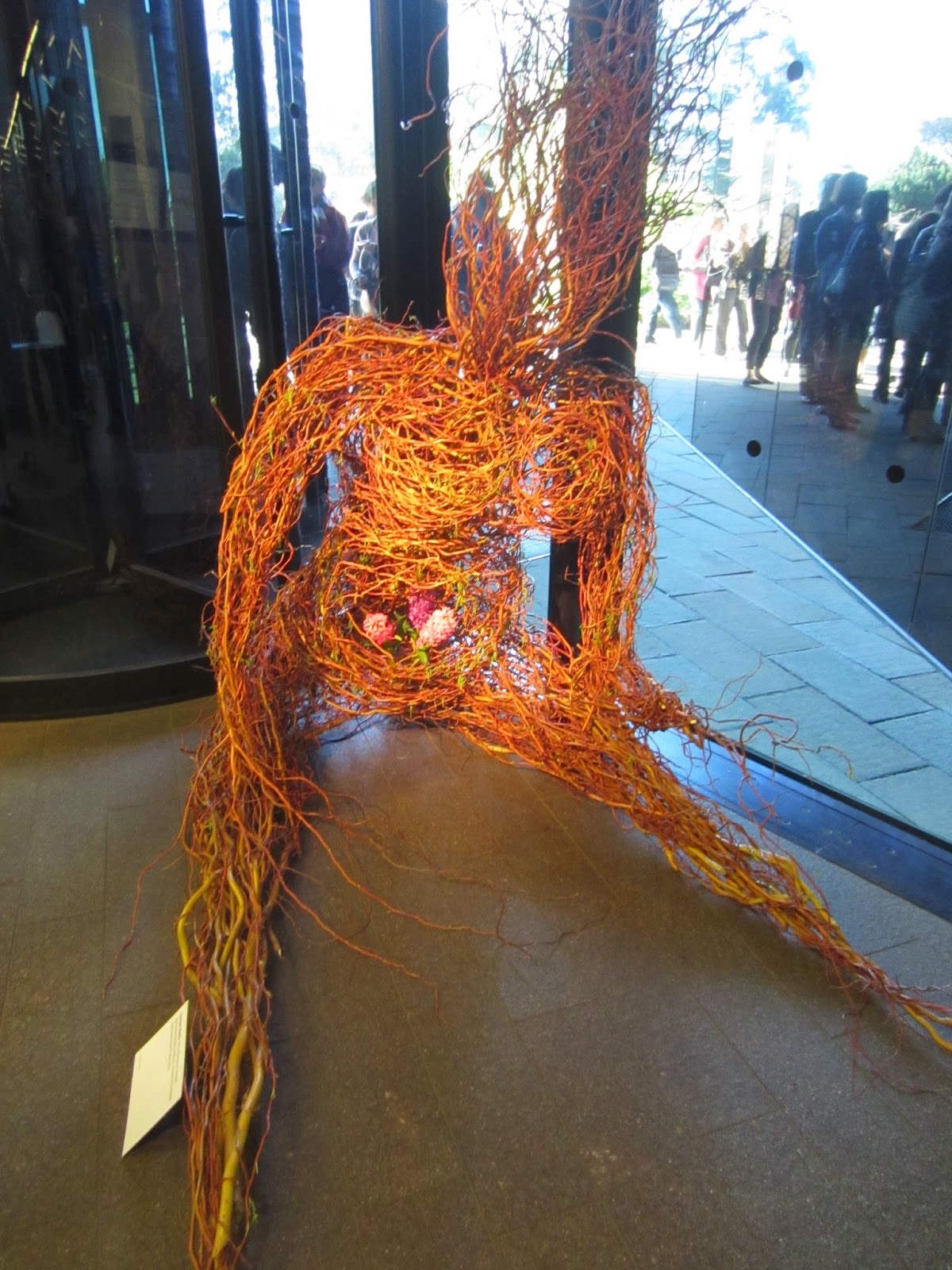 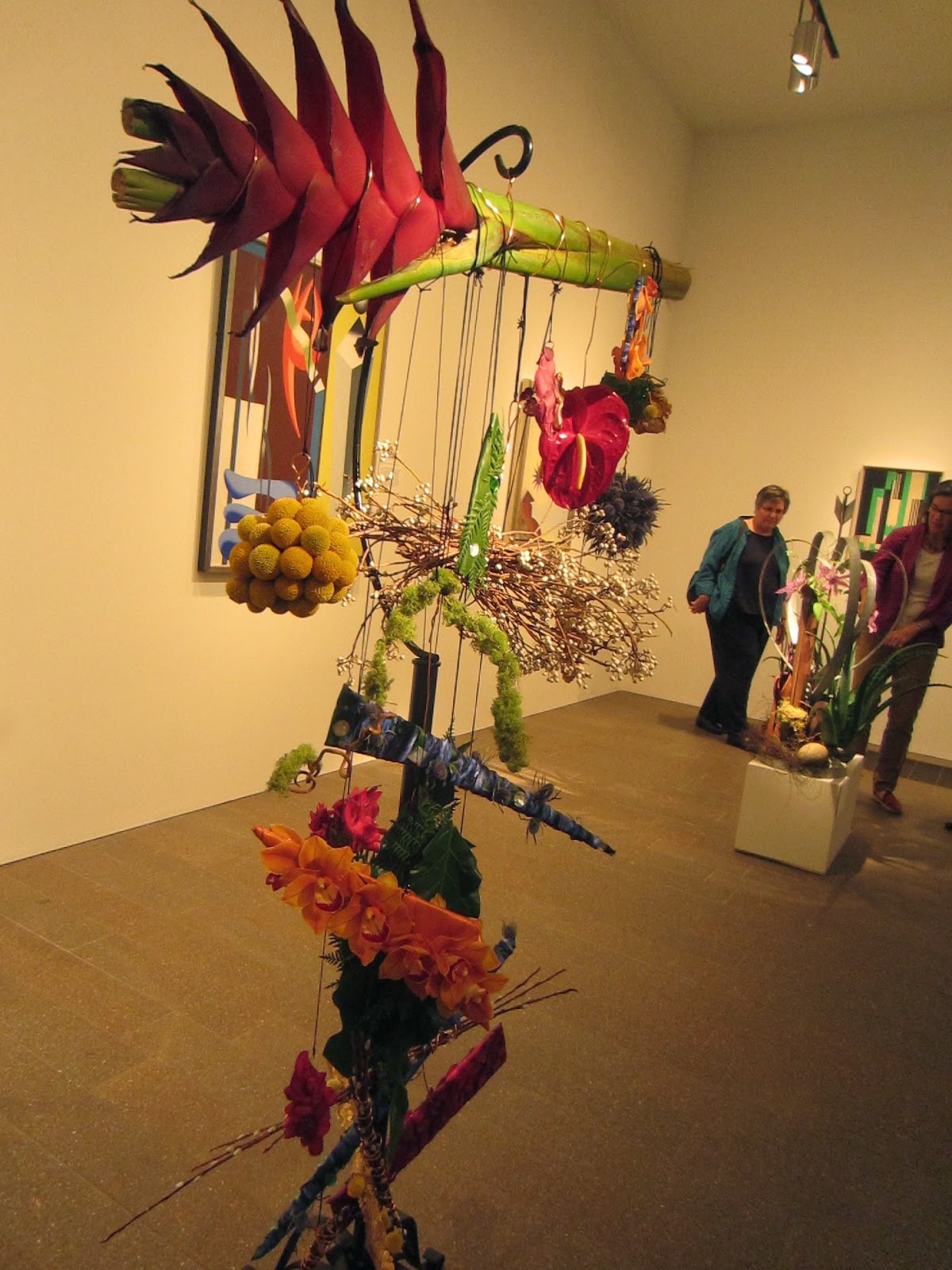 and some wonderful.  A David Hockney video of spring and this: 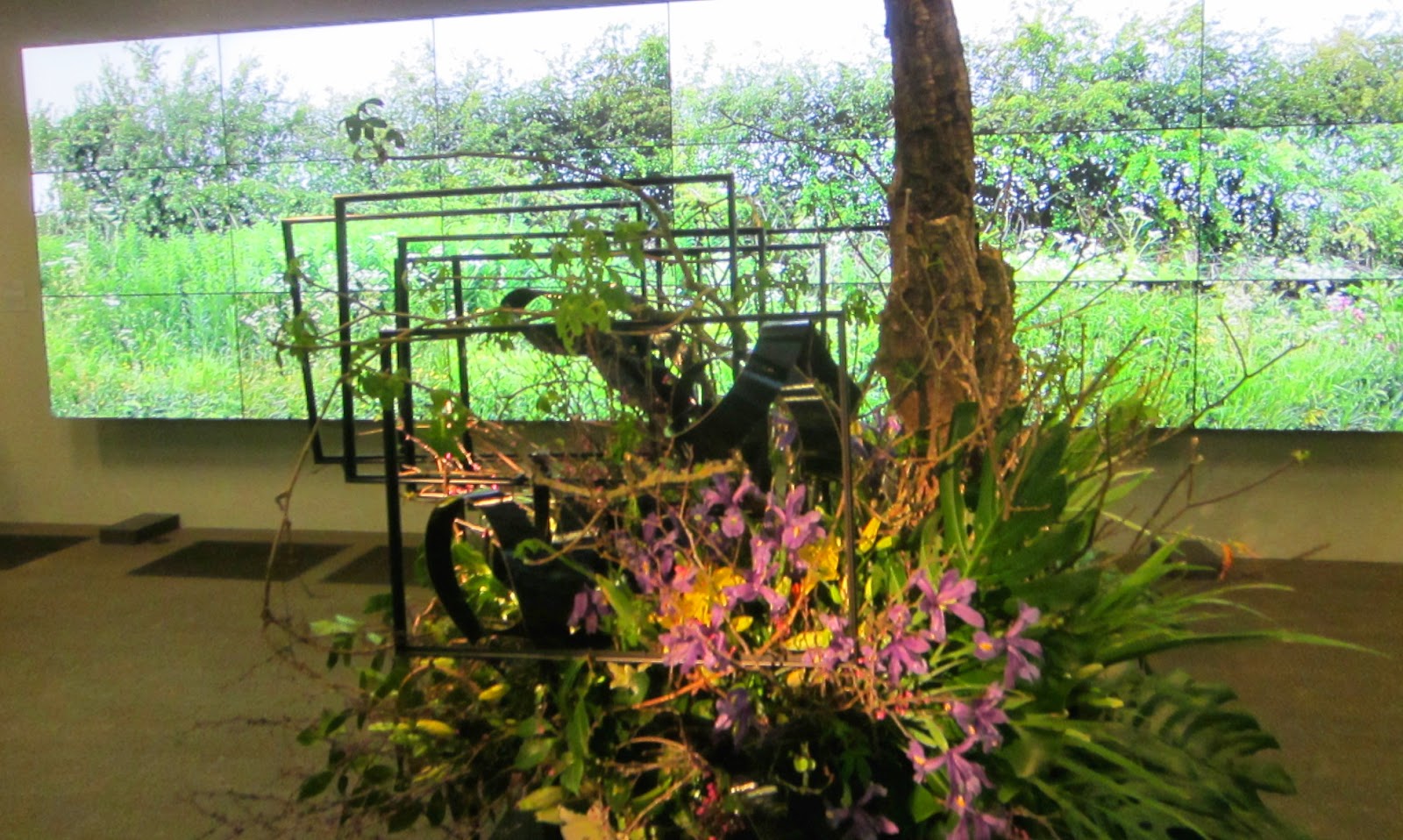 A white wall in the hall made into a modern woodland. 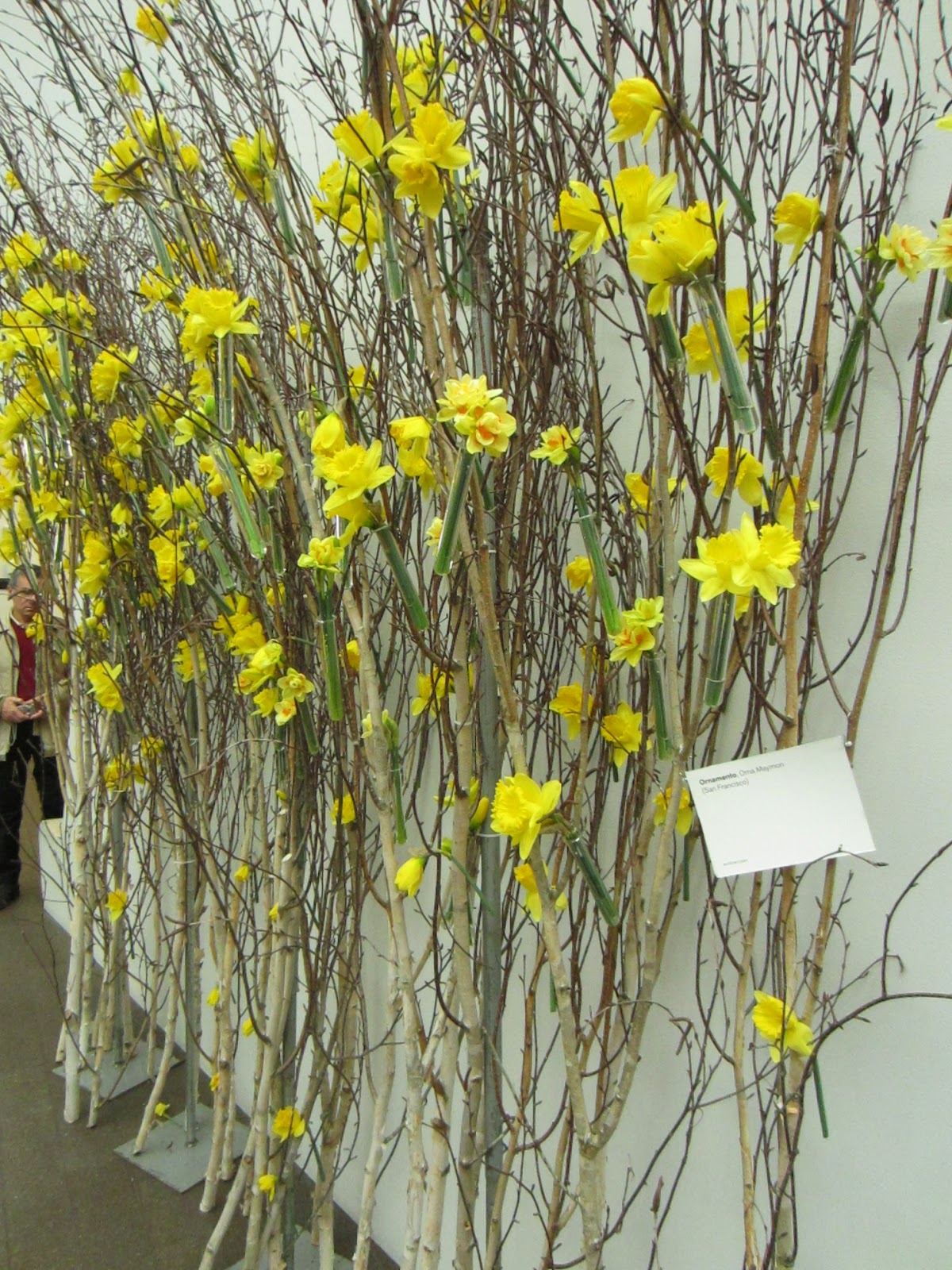 Mark your calendar for next March, go to some lectures, and get your tickets early.  They sell out fast - I know why.

Posted by Postcards From The Hedge at 9:59 PM