I made oven dried tomatoes and Liz loved them - so Liz, this is for you. Before you start a warning - this can be an all-day project so start early, and don't start this when you have a hair appointment or a dinner date. Unless it's dinner at your house. Then you can invite me!

San Marzano tomatoes are the best (more about that later) but any roma tomato will do. Split them in half: 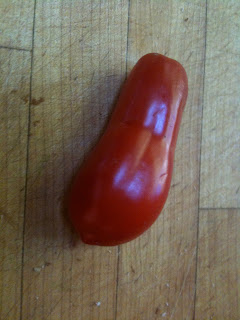 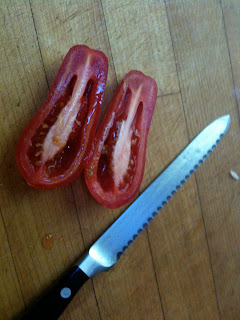 and put them cut side up on a rimmed baking sheet. Fill the sheet - they should be cheek-by-jowl. They can even be touching. Pour about a cup of extra-virgin olive oil over them. I use Bertolli for cooking, I think it's the best. (I use McEvoy for dipping, pouring, but not for cooking. Too precious.)
Put the tomatoes in the oven at 300 and watch them - when they begin to brown move the brown ones into the center of the pan, and put the not-so-brown ones on the outside. This usually takes about an hour to an hour and a half, but depending on the moisture content of the tomatoes it can take longer.
Turn the oven down to 250 or even 225 and check on them every half hour or so. This is the place to confess I turned the oven down to 225 and went off to take an hour nap.
When most of the tomatoes beginning to darken, turn them over. When most of the tomatoes are half way to looking like sun-dried tomatoes in oil, begin taking them off the baking sheet. I find they do not all get done at the same time, so I end up putting half a sheet back in the oven for another 15 minutes or so. The entire process takes hours - these took about 5 hours. If I'd left the oven at 250 or 275 and watched them, it would have been quicker, but oh did I need that nap! 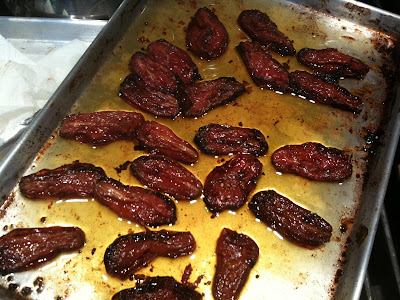 To serve the tomatoes as an appetizer, stack them in a dish, pour over some of the oil, and serve with baguette for sopping up the oil. 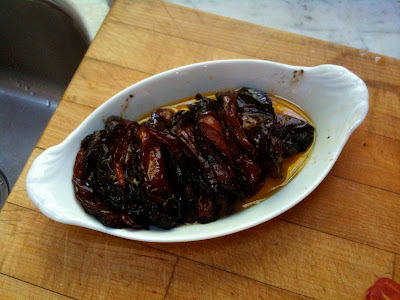 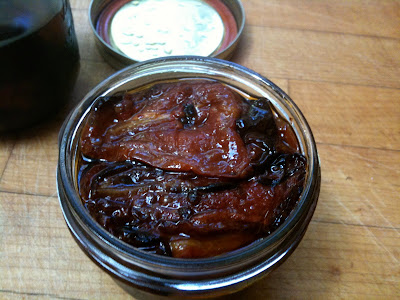 Tamp down the tomatoes, then... 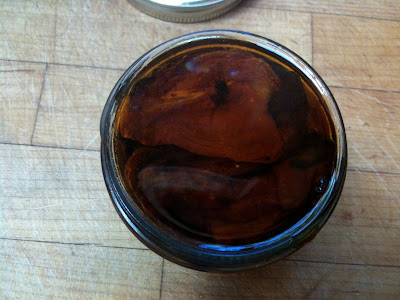 pour that yummy olive oil from the baking sheet over the tomatoes. Use enough of the oil to cover the tomatoes. These keep in the refrigerator for months. Put any left-over oil in a jar and use it over pasta -
(there are a few tomatoes in here too - they would not all fit in one wide mouth jar) 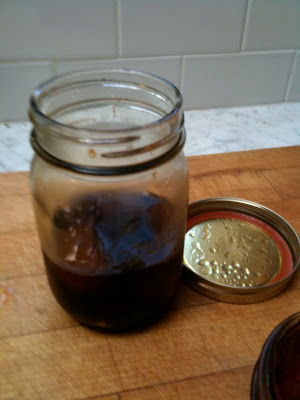 I love it over spaghetti with torn-up fresh basil and parsley. Just warm the oil and pour it over the drained spaghetti, throw in the basil and parsley, sprinkle with hot pepper flakes if you dare, toss and eat. If there are any stray oven dried tomatoes they can go in too. I prefer this dish without Parmigiano - I think the cheese overpowers the flavors. And believe it or not, I don't think everything needs cheese.
And yes I know the last three photos are sideways. I'm working on it, I'm working on it. Or maybe I'll go take another nap. (I fixed it! now I'm going to nap. I've earned it.)
Posted by Postcards From The Hedge at 11:59 AM