Eric brined it - in orange and tangerine juice, spices and alcohol. I am waiting for a copy of the recipe - I will post it when I get it.

He roasted it on the spit on John's multi-gazillion dollar barbecue - a friend gave him the barbecue as a gift; they had to re-design the back yard to install it, and it cost the earth and took months. But it is fabulous and has changed the way they live in their garden.

One leg of the turkey kept hitting the grill as it went around, so Eric nicknamed it the road kill turkey. 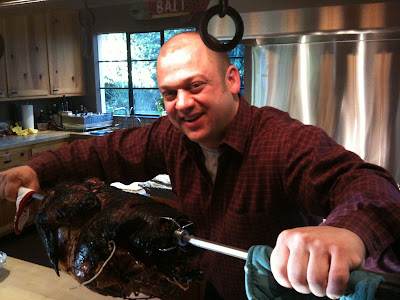 It took both Eric and Zack to muscle it in the house. How much have we really evolved from when we lived in caves? Did a cave man ever have a more satisfied smile? I have heard the Pilgrims really ate eel - so are we celebrating a more ancient tradition? 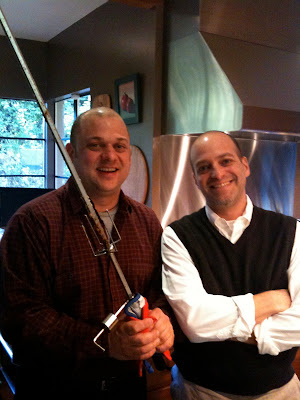 It was very brown... 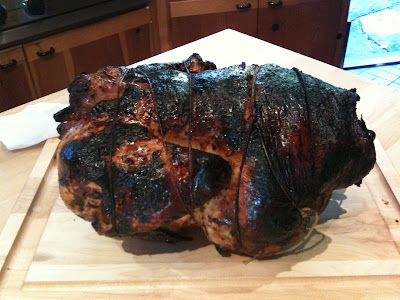 and so delicious we picked at the parts that didn't show and nibbled and giggled. I'm not usually a turkey fan but this was fantastic.
I saw a friend and her daughter biking as we were heading out to turkey dinner - she told me her mother-in-law had been ill and the thought of her MIL's son and daughter and their families sitting down to dinner at her table while her MIL was in the hospital was too sad to contemplate. So she made a reservation at a restaurant. As it turned out her MIL was well enough to join them, and they had a very relaxed and thankful Thanksgiving. Not cooking for three days and then contemplating a mountain of dishes, some in need of atomic powered cleaning, some that you only get out once a year and have to wedge back in the back of the cupboard like a chinese puzzle - if you look at it like a foreign anthropologist this holiday is one weird event.
So I have a Thanksgiving resolution. To use the things I treasure every day, pots and pans, platters and silver, truffle salt and strainers
And to tell the people I treasure that they are the reason I cook, breathe, talk, smile, get up in the morning.
I love you. You know who you are.
Posted by Postcards From The Hedge at 9:33 PM