With the exception of The Gurnsey Literary and Potato Peel Society I don't like books in the form of letters. And books of actual letters? don't get me started. I tried to read the letters between Winston and Clemmie Churchill, and I think I've found a cure for insomnia.

So I was surprised to be so enchanted by not one but two books of letters - In Tearing Haste, letters between Deborah Devonshire and Patrick Leigh Fermor... 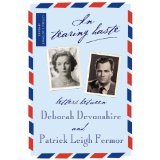 ...and As Always, Julia, letters between Julia Child and Avis DeVoto. 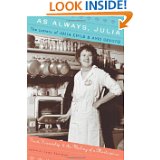 Two stories of remarkable friendships, asides about events then current, other books, interesting people of those times.  Great reads, both. And thanks to them I have a pile of books on my nightstand. Mani and A Time of Silence by Patrick Leigh Fermor, Counting My Chickens and Home To Roost by Deborah Devonshire, several cookbooks by Julia - and I have ordered some of Bernard DeVoto's books. And subscribed to Atlantic.
We don't write anymore. Well, Des does, mommy does, Aunt Ruby does - and I do. But letters like these? Between two fabulous writers, witty and funny and flowing? No more.
And I bought carbon steel knives. Sabatier. On line. Deliciously sharp and a joy to cook with. I got the 10 inch chef's knife (a bit big) and a paring knife.
Onion soup recipe later.
Posted by Postcards From The Hedge at 9:48 AM