It is pouring rain when seven of us pile into two taxis and head across town to see some of the surviving members of the Buena Vista Social Club play with some of Cuba's other famous musicians.

We get there first, largely because Delin told the driver "I was born in Havana."  Which means "I know my way around, so don't be taking us for a ride," both literally and figuratively.

While we are waiting for the other taxi to arrive at the club, and trying to stay out of the rain by standing on the sidewalk in front of  the two huge doors to the club, a little car turns in towards us, gets halfway across the sidewalk and loses traction in the rain-soaked gutter.  The driver is gunning the engine and pointed directly at our knees, so we scoot to the side, just as he gets traction and stops inches from the door.

A jowly old woman in a sparkly headband, flowing flowered blouse and skin tight white pants slithers out of the car, growls at the driver, and disappears inside.  Delin says "That is one of the singers for tonight!"

The rest of our gang arrive complaining about the crappy Russian Lada taxi they got put in.  "It was Hell!"  I think they're exaggerating; I will learn otherwise later.

Inside we climb three flights of wide marble stairs, cantilevered over a tiny courtyard and so slanted toward the courtyard I pray they don't snap off before we reach the top.  Prayers answered.

A tall-ceilinged room, lots of columns and open to a big courtyard, which is helpful because when the dancing starts, it gets hot in here.  We are led to a table in the center back with a direct view of the band. 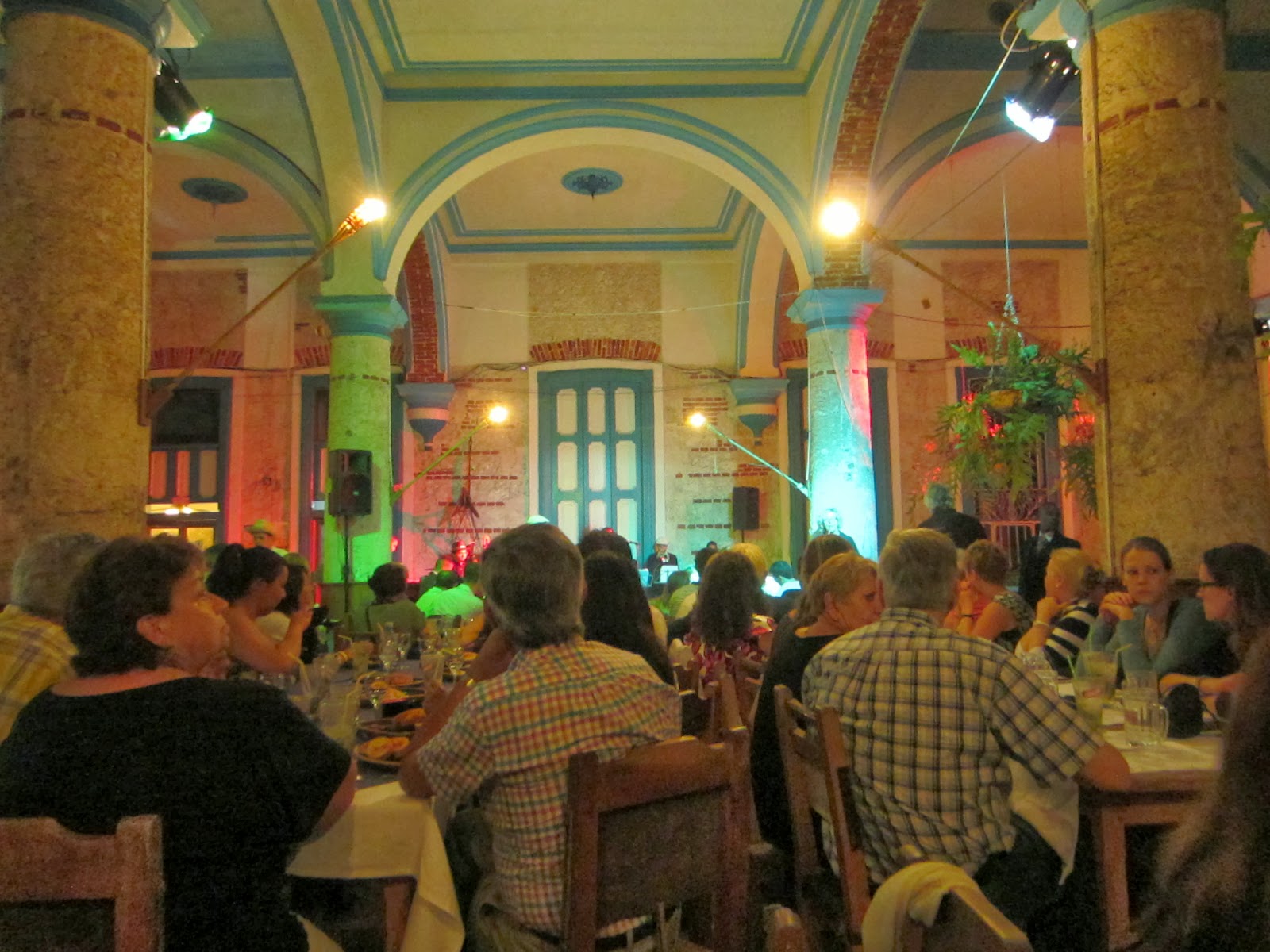 At first I am disappointed to be so far away, but Delin says "Just wait - Cuban music is really loud."   She is so right (as we discover when the Conga line starts, and we do a lap past the speakers), and besides, the singers come into the audience to sing and clap and dance, to get us fired up.  We're close enough.

They are old - we have apparently come on oldies night.  The place is packed, the band is wearing fedoras in red and black and white and decked with jeweled hat bands.   It looks like a Cuban version of a Rat Pack reunion. 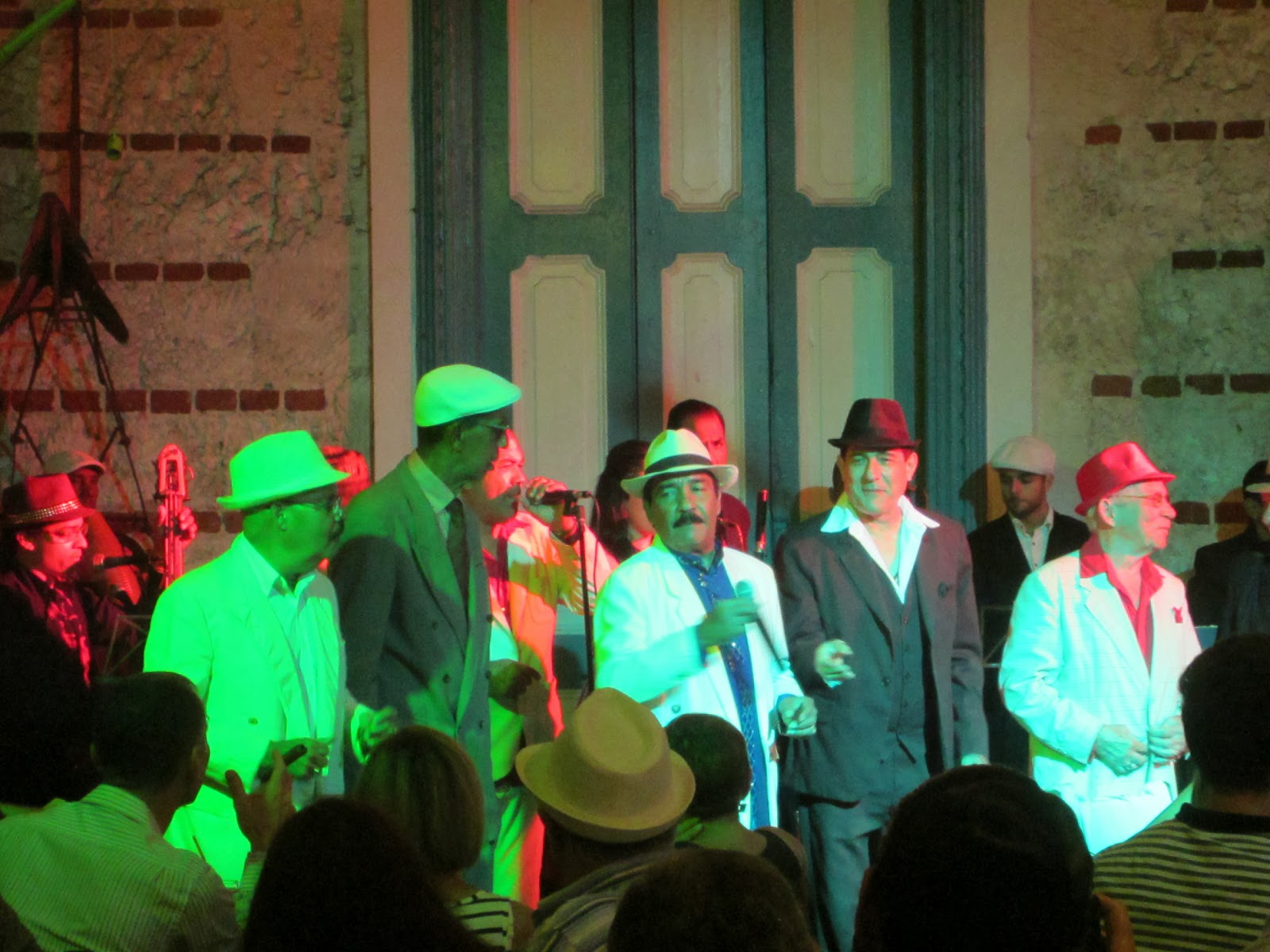 One of the singers looks like our friend Peter Godsick.  One looks like the actor Chris Noth from The Good Wife. The winner of the Hugo Chavez look-alike contest is on flute.  I lean over to Wally and yell (it's loud, remember?) "That female singer is the Cuban Peggy Lee!"
Wally yells back "Yeah, but she's not dead."  Good point.

We can't drink the mojitos; not sure about the ice and not willing to take a chance.  So we drink beer and clap, and eventually get up to dance. 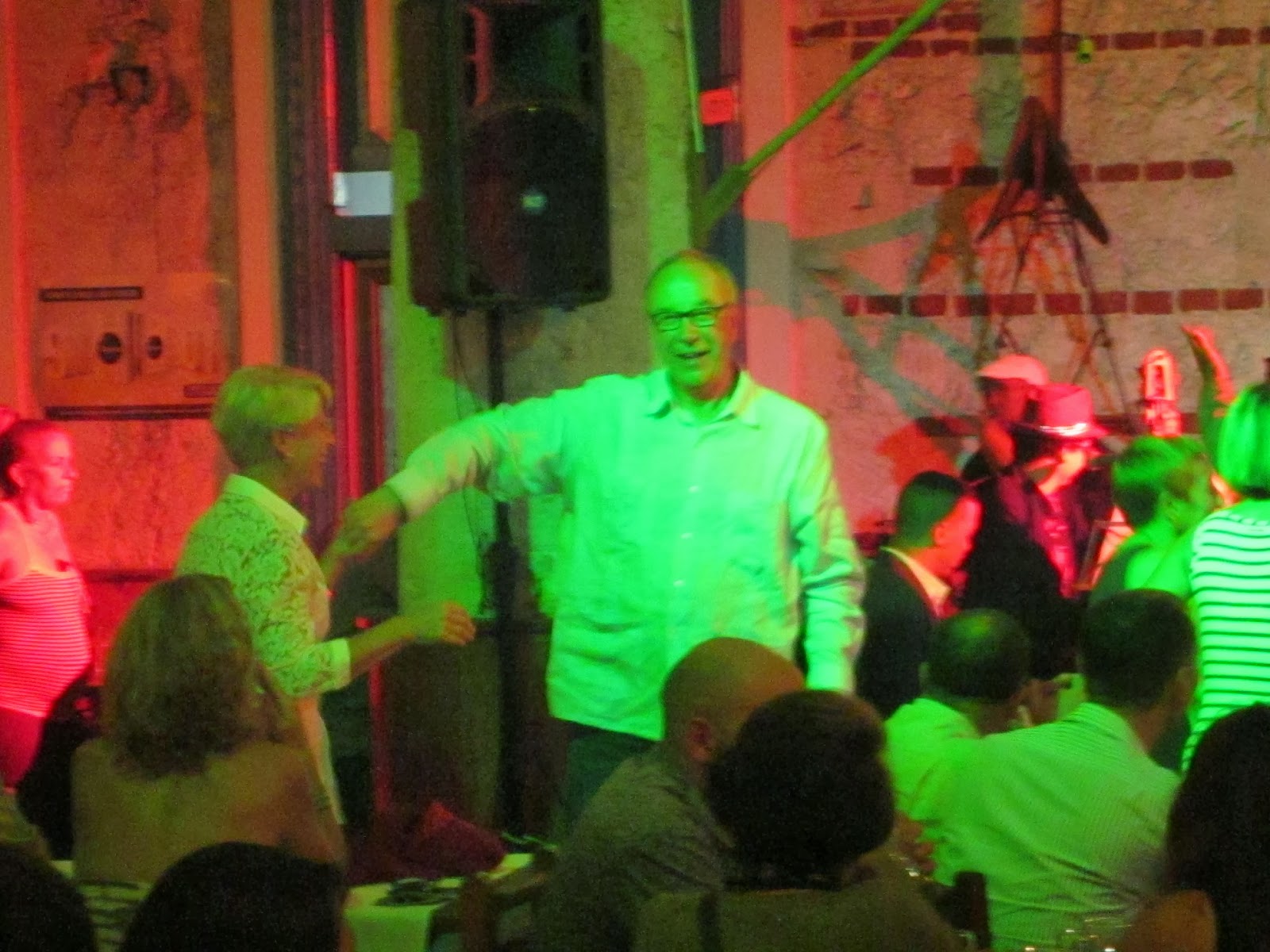 Even the servers are dancing.  And man, all Cubans can dance. Watching, I alternate between inspiration (Hey, I'm gonna try that!) and deep despair (Who am I kidding?  I don't bend that way.) Eventually I stop thinking and just dance, and I have a wonderful time. 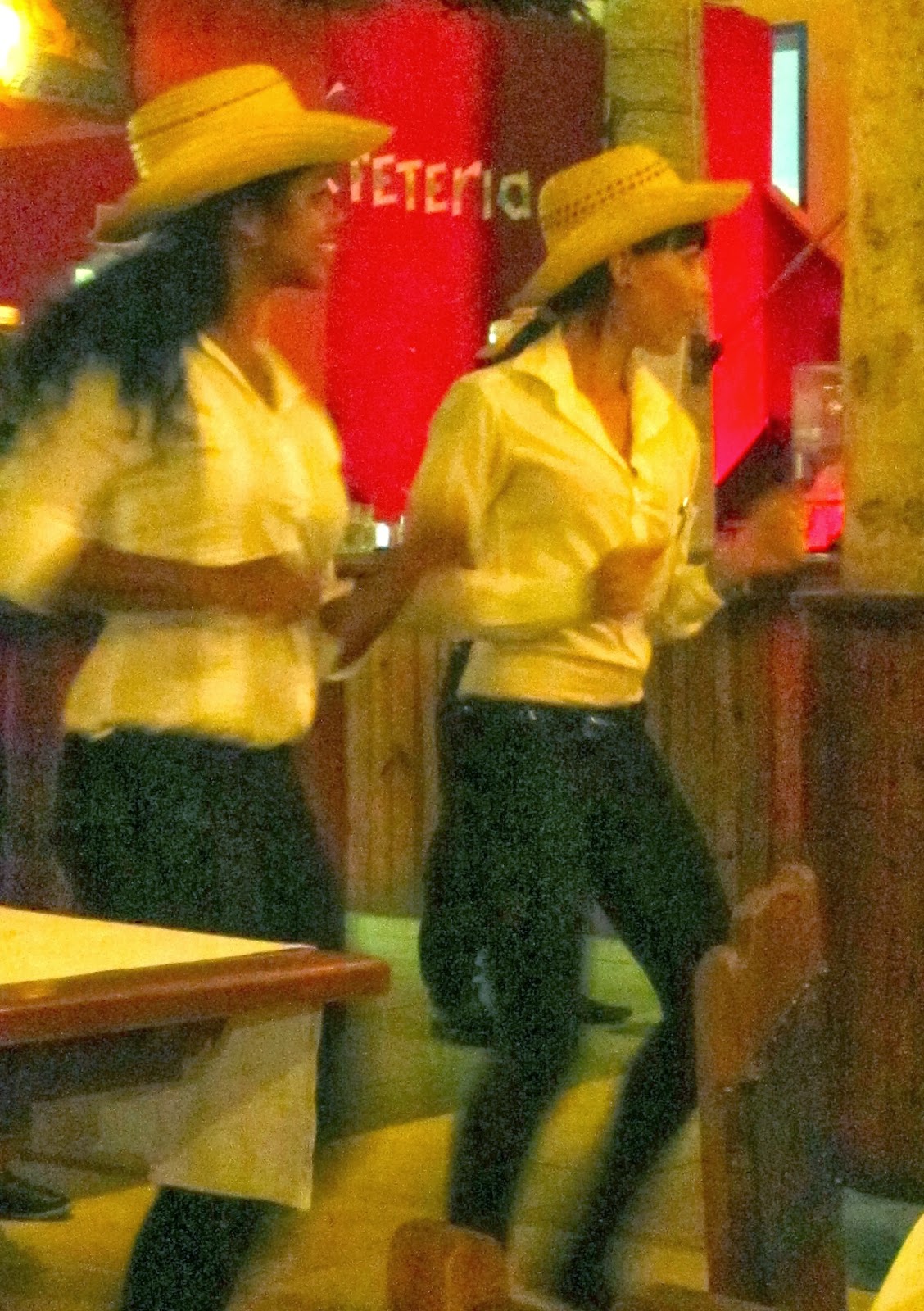 The singers ask the other tables "Where are you from?"  In Spanish, of course.  Chile, Holland, Argentina, Mexico, Italy. Remembering those billboards about the blockade, and the lecture about America's bad behavior we got from Carlos, I ask Delin "Where shall we say we are from?"  She grins from ear to ear, points at herself and shouts: "U. S. A. !!!"

I learned something tonight about standing up for yourself, about being who you are even if it's not popular.  But no one asks us "Where are you from?"  I think they know, and they don't want to deal with the fall-out.

Delin yells "I think I am the only Cuban born person here!" and I think she is right.

We leave just as the Conga line is having its last trip around the room, peeling off at the stairs, dashing down and snagging taxis (it is still raining) before the rest of the crowd spills out.

Our driver leads us around the corner to the most beat up Lada I have ever seen.   The springs stick up out of the cushions, there are no handles to roll down the windows, and the exhaust vents directly into the car.  But the show is over, taxis are being snapped up, so we decide to go with it.

When Wally asks "Can you please roll down a window?" the driver answers "No.  They don't roll down."

I am convinced we will all be overcome by the fumes, including the driver, and when we all pass out we will crash into the sea wall along the Malećon and end in a fireball.  But we make it back to the hotel with only headaches. 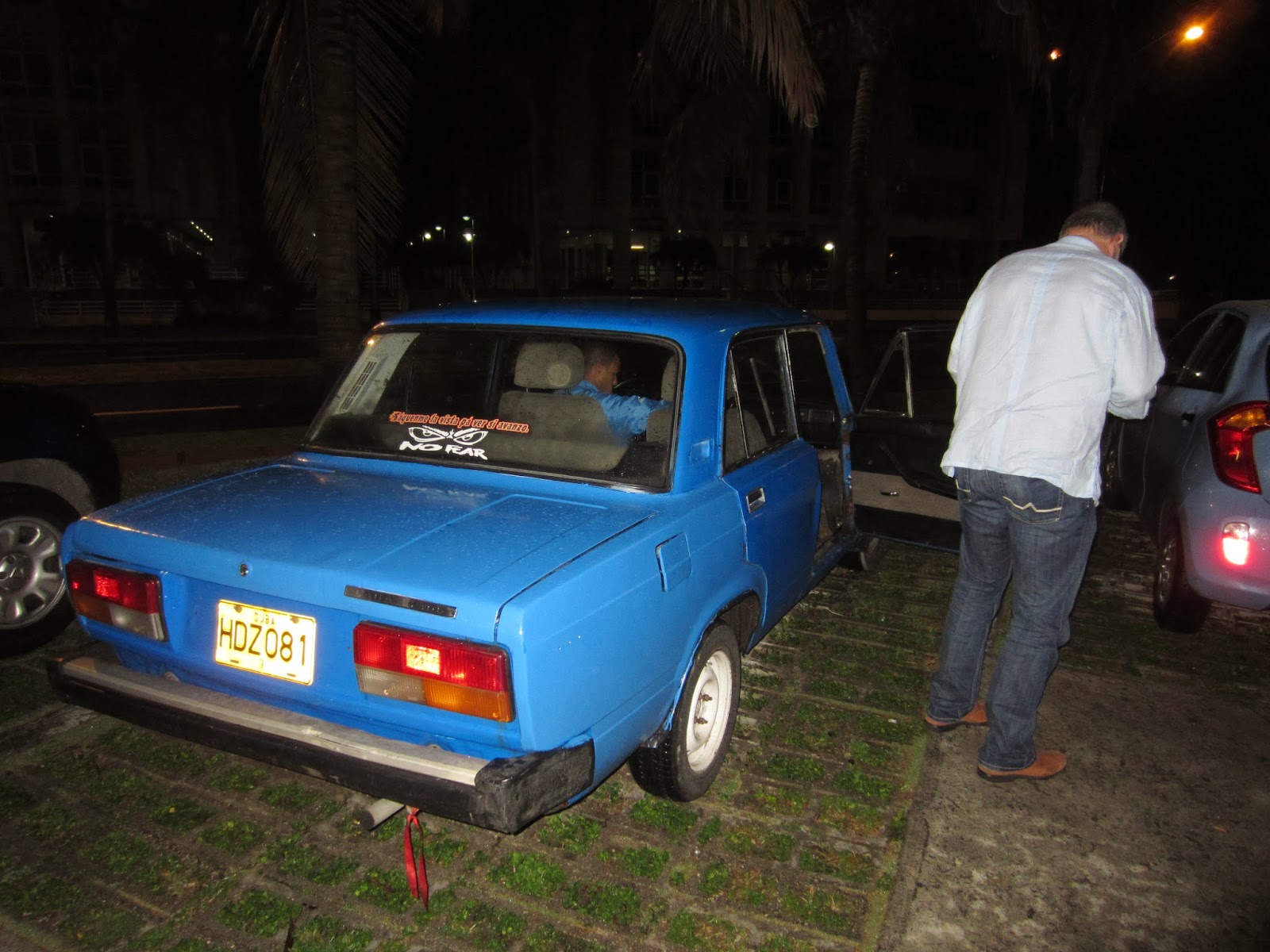 When the driver drops us off by the dumpster, outside the basement disco, we realize this is one of the rogue taxis we have been warned about.

The sticker in his back window reads "No Fear".  Obviously not put there by a passenger.

Posted by Postcards From The Hedge at 5:54 PM