Ralphie (I’d shoot my parents if they gave me that name) is part of the one million Miami Cubans.  He talks about growing up in a Cuba frozen in time - the food, the language are all from the 50’s.  And there is great nostalgia for that life,  just ninety miles (and fifty years) away.

At dinner with out fellow travelers, we talk about the two Cubas, the remembered one of his parents, the one they always hoped to go back and reclaim, and the one that is just to the south.  I would add there is a third Cuba - the ideal socialist state, the one that hasn’t quite happened yet.  The one they're still trying for on the island.  The one with old American cars and crumbling buildings and CDR offices in every neighborhood - that stands for the Committee for the Defense of the Revolution.  Not a happy place. That's the Cuba we are going to tomorrow.

Ralphie walks us thru the Department of Treasury paperwork - when was the last time the DOT cared where you went?  and reminds us there are 220 laws - American laws - forbidding interaction with Cuba. Unless you're on a People To People trip - more about that later.

And there is a couple on our trip with their American-born daughter who both left Cuba as children 48 and 52 years ago.  This is their first trip back, and it's very emotional.  We are so privileged to be sharing this experience with them.

Off to bed, we have an early flight, and I swear the airport Hilton has skid marks on the roof from the low-flying planes.  Just as you start to drop off to sleep another plane screams overhead.  I think it must be similar to sleeping in a war zone.  Rough night.

At the Santa Clara airport we go thru security as we get off the plane.  Instead of plastic bins they have tiny beat-up wicker baskets that snag your scarf and sweater.  And dogs sniffing bags. There are lots of Cubans returning from Miami bringing soccer balls, microwaves, clutching teddy bears and dolls, toting flat screen TVs.  Like being in the Walmart parking lot at Christmas - minus the cars.

And that's one of the first thing you notice - there are almost no cars. 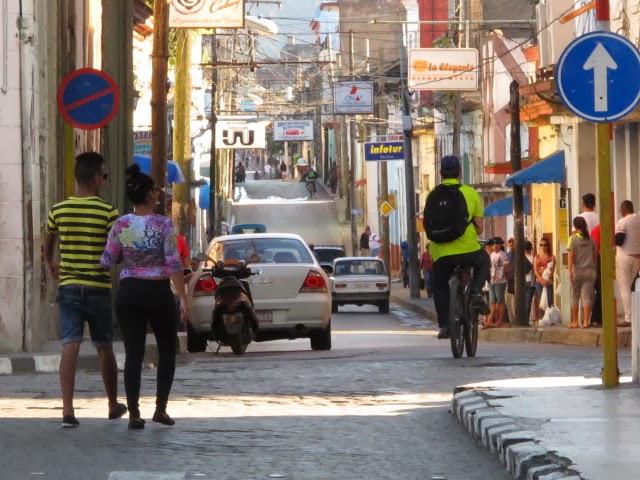 A few old Yank Tanks, as they call the American cars from the 50’s. 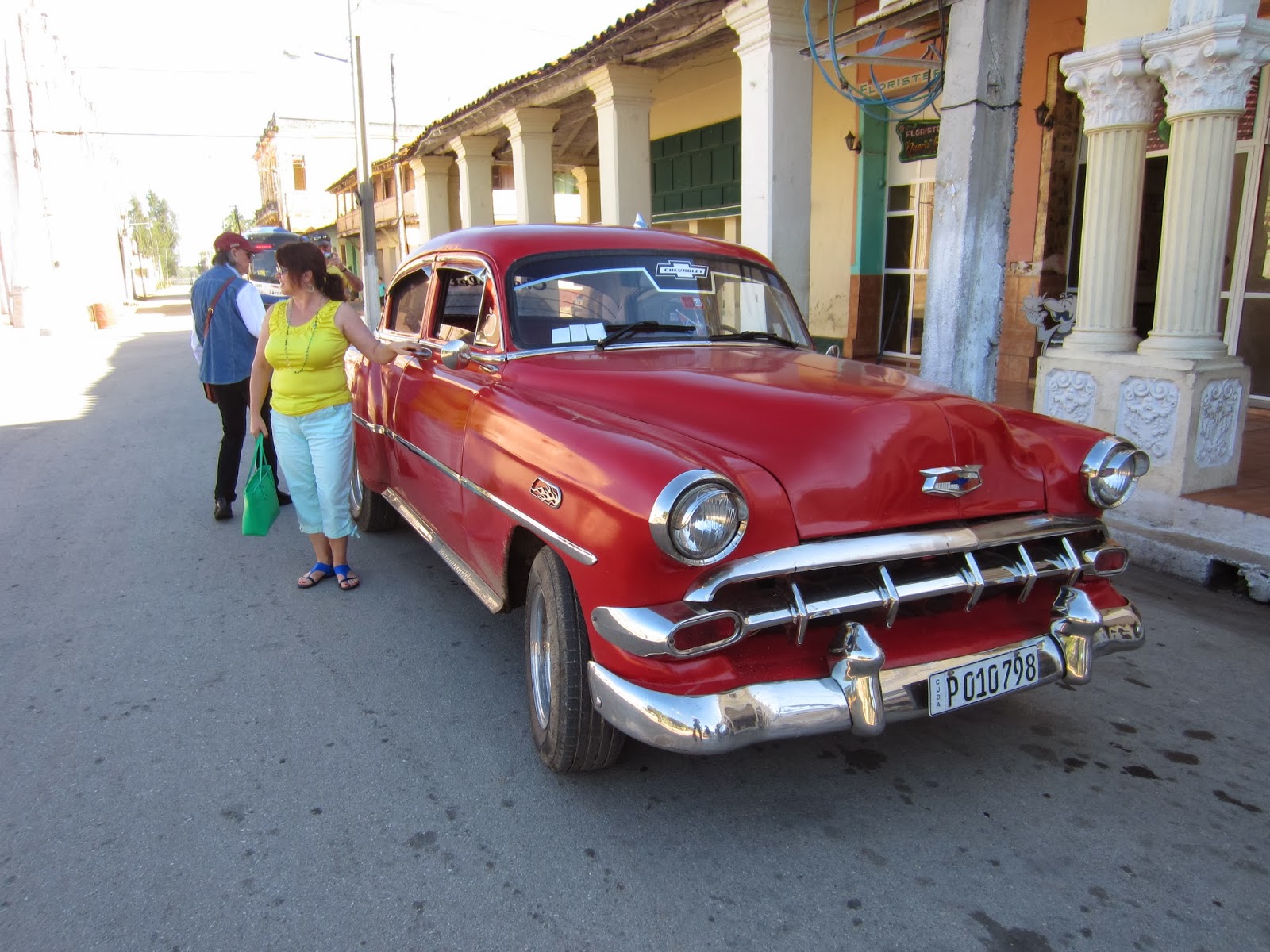 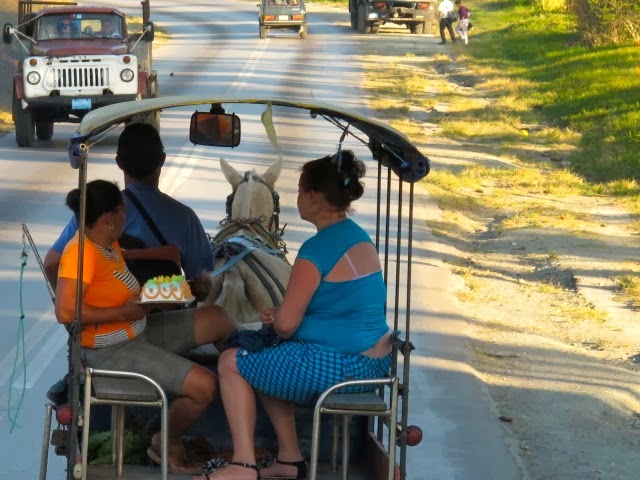 A few Soviet Ladas.  But the horse-drawn carts and bicycle taxis outnumber the cars. 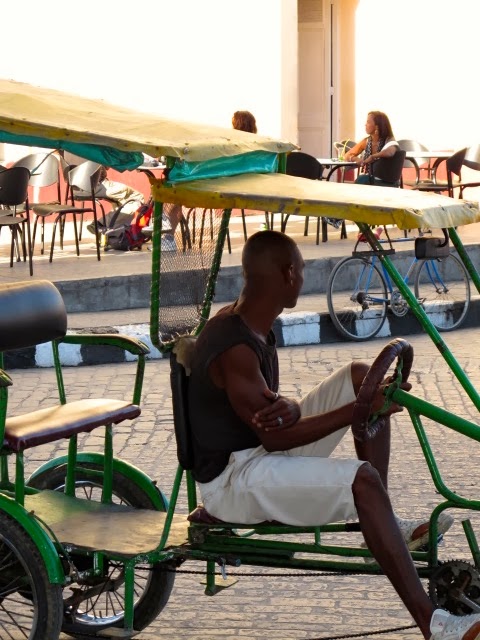 At the local cultural center we meet the children: 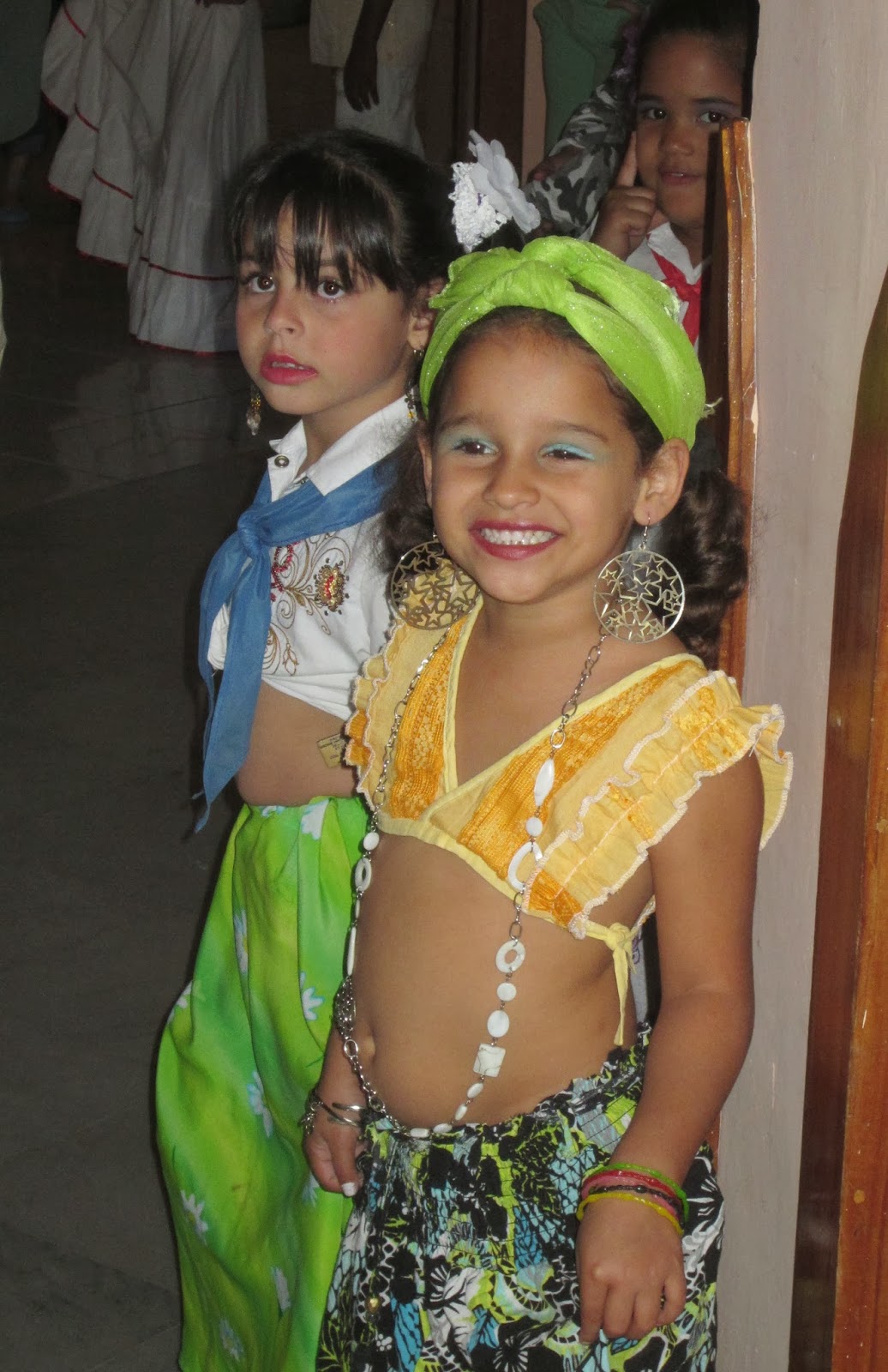 one flirting, one reserved.  One beaming, one guarded.  The faces of Cuba.

They put on a production of Romeo and Juliet performed by four to eleven year olds - with bad lighting and worse acoustics.  And fabulous acting and dancing, and great enthusiasm.

It’s a modified Cuban version, complete with baseball-capped homies and rifle-toting hombres, and of course a paper maiche pig roast.  The kids are adorable, and after the performance (and the obligatory audience-participation dancing) tell us what they want to be when they grow up.  Actors, singers, one stewardess. 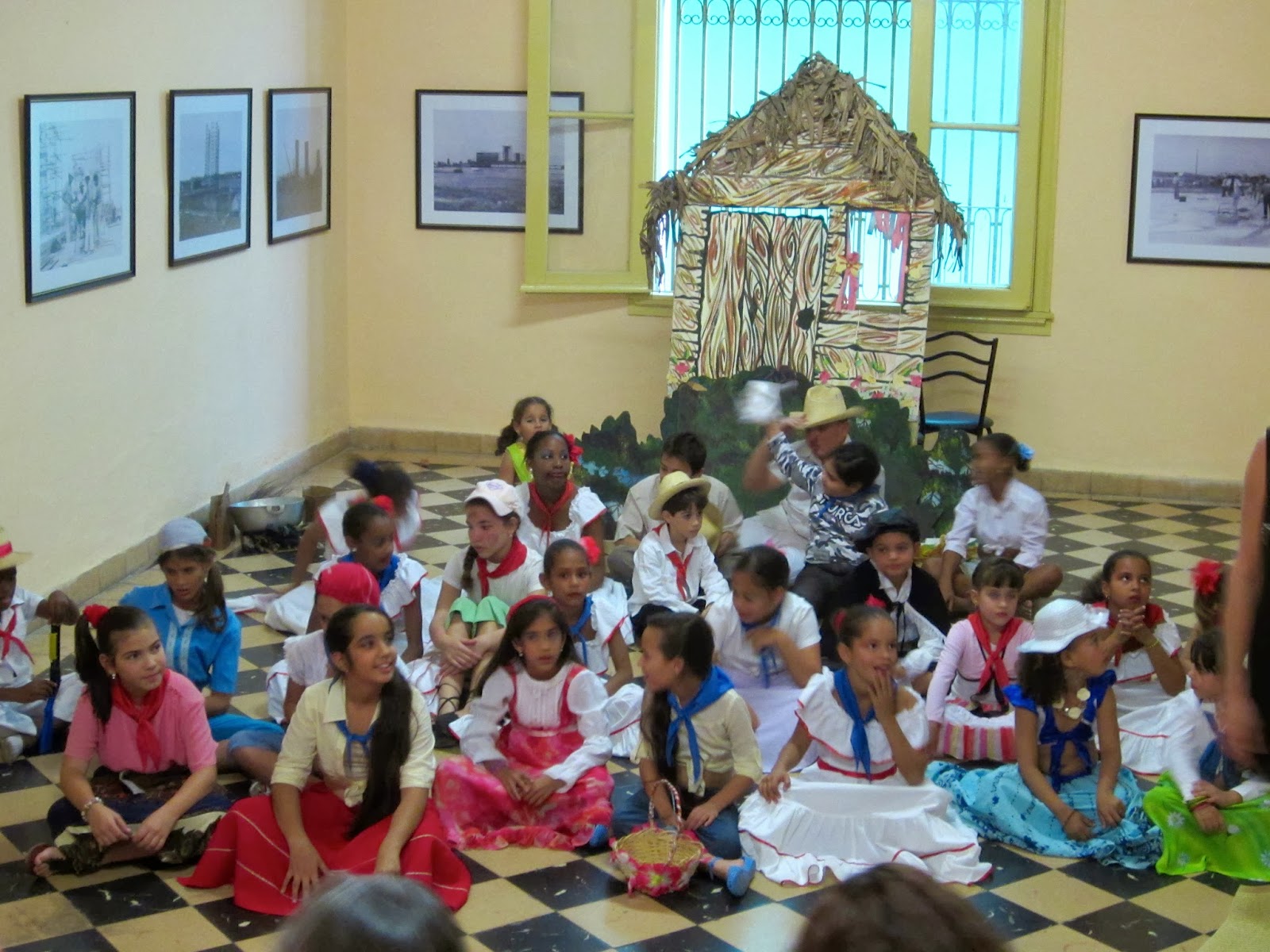 I say "What do they want to know about us?" and they ask us questions.  A five year old girl says wistfully, "You are from America - it must be very beautiful, and you have everything you need."  It breaks my heart. 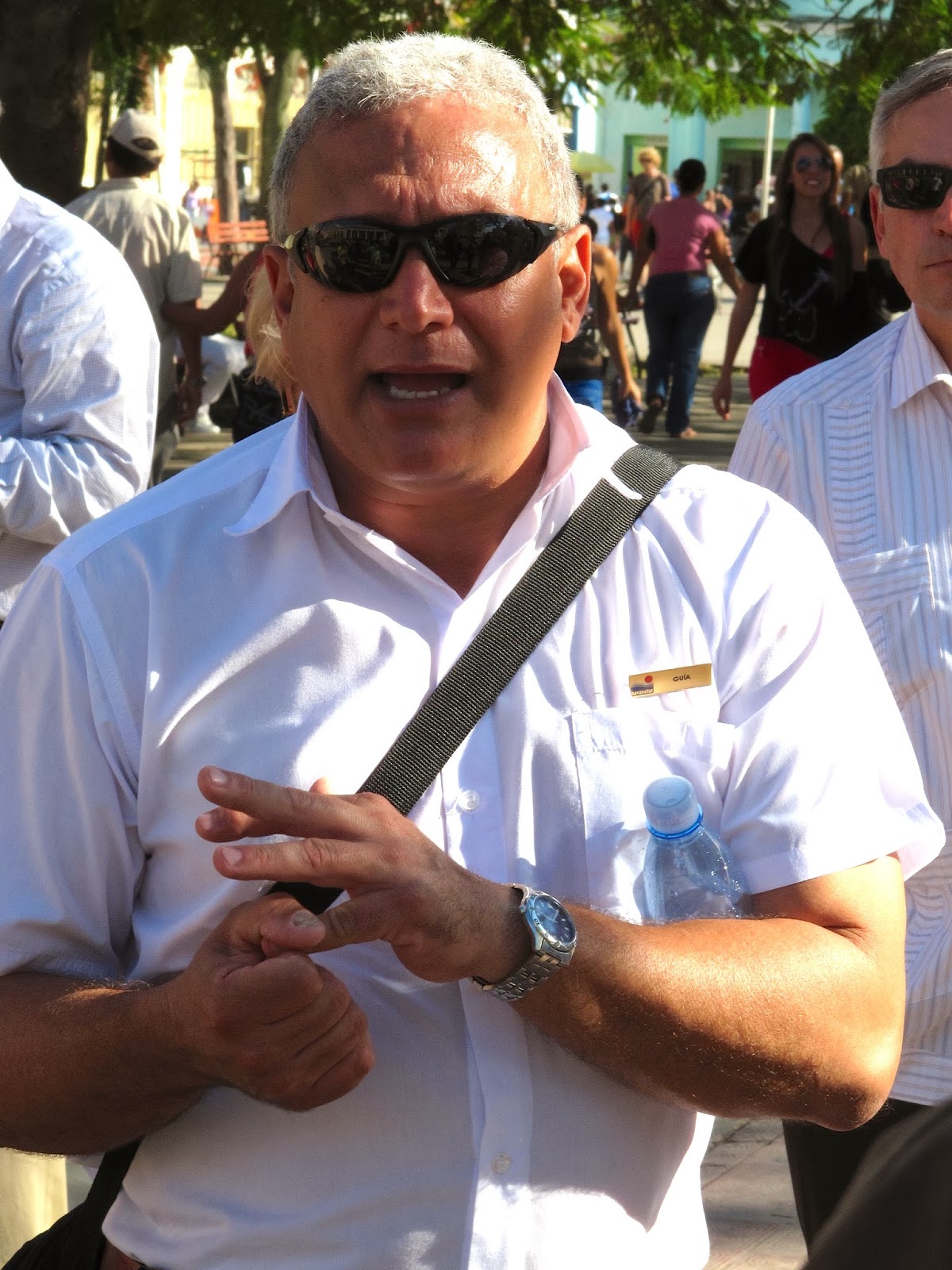 fills us in on the history and day-to-day reality of life in Cuba.  When the Soviet Union collapsed in 1990 the Cuban economy collapsed too.  No more subsidies, no more largest trading partner.


Remember, after the Triumph Of The Revolution everything was nationalized -  houses, factories, schools, utilities -and the government 'gave' you a house (a house that they still owned) and food (heavily subsidized, bought at a deep discount with ration cards and long lines).  In exchange the government did everything for the people - free education, free health care, those food subsidies, even guaranteed jobs.  But when the USSR went away the Government couldn't afford all the things it had been doing - turns out the successful socialist state was heavily dependent on Russian subsidies.  Oops.

If you don't own your house, and the government could take it at anytime, why would you maintain it?  So nothing has been maintained: 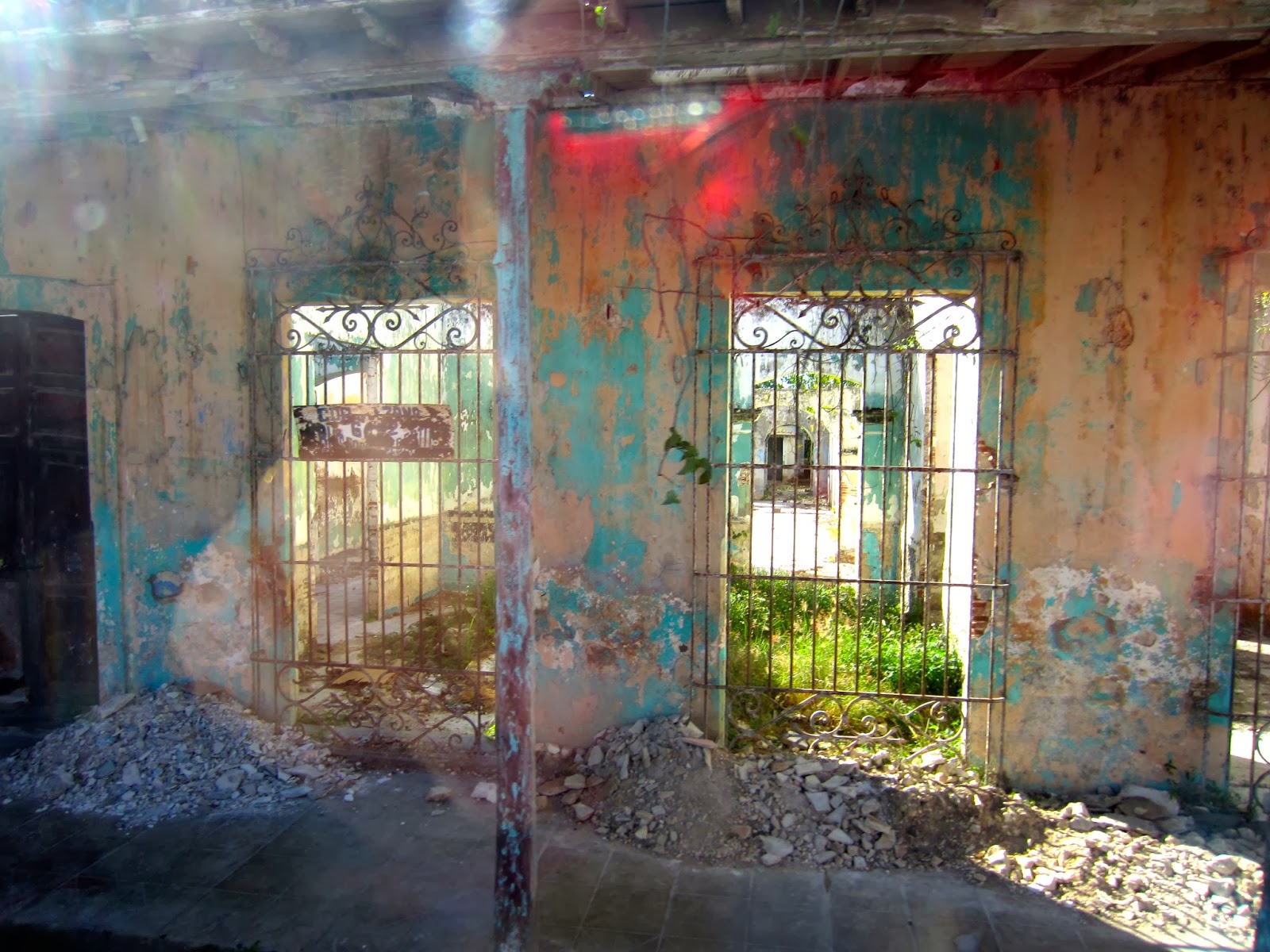 since the Triumph Of The Revolution.  Not just the revolution, every time a Cuban mentions it, it's TTOTR. 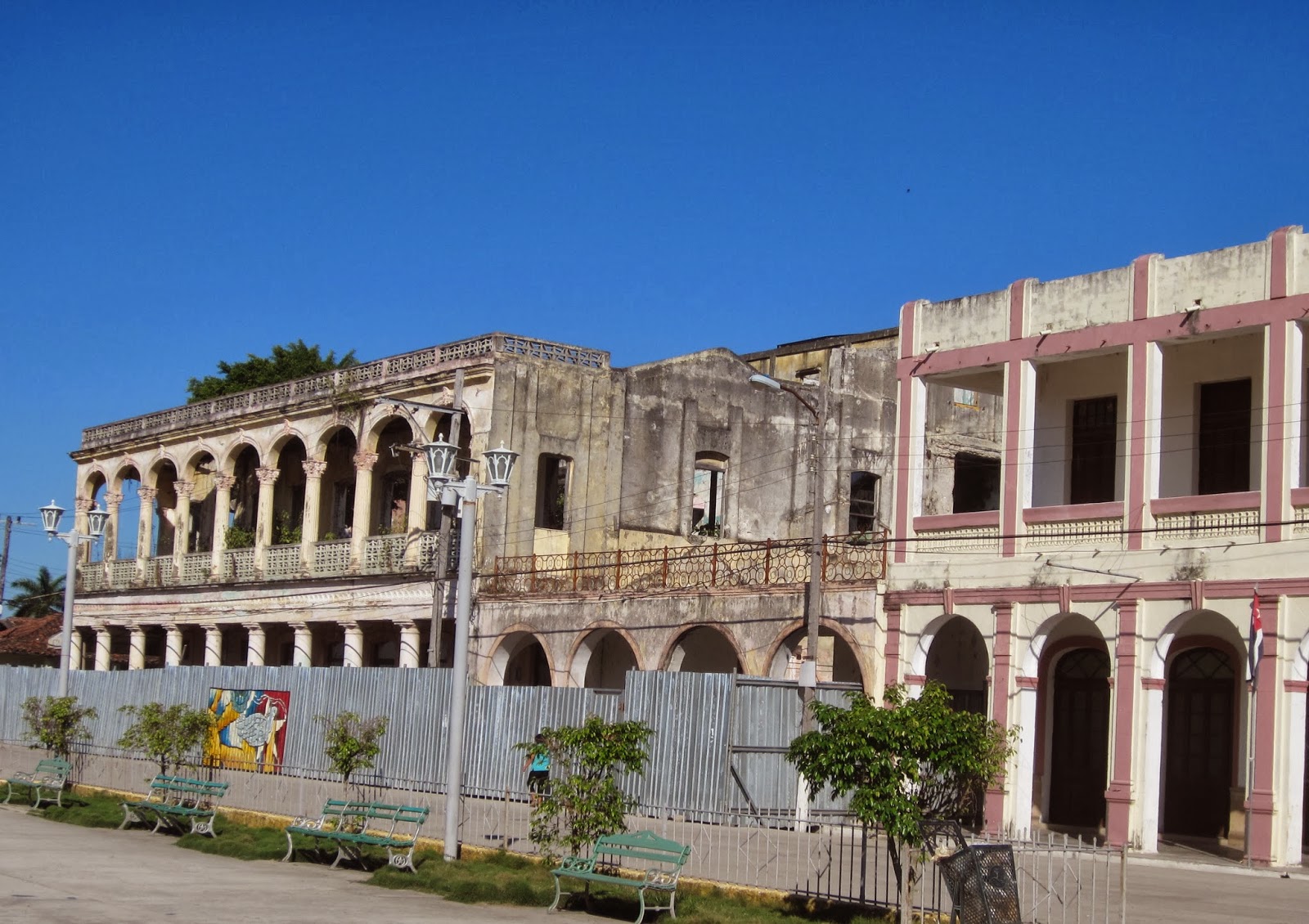 This building in Caibarien is fenced off because it's about to fall down.  So is the church.

This was Abelardo's home town, his old school is just behind the church, though both were closed after the revolution, and both are crumbling too.  Happy to see Caibarien again, sad at the state of affairs.  He and his family walk into his old school, surprised that the American Theatre across the street hasn't had a name change. But the church is closed, it's in danger of collapsing any minute.

Cuba is trying to find a system of socialism that works, a hybrid with some free enterprise so the half a million people who've lost their government jobs can start businesses and make a living, so that the government can continue to subsidize food and education and health care - and probably a thousand other things we don't know about yet.  And it's confusing, for until the last few years private enterprise was illegal, private ownership was unheard of. It's hard to make that big a u-turn quickly.

We cross a 48 kilometer causeway (heavily guarded) to Cayo Santa Maria (Saint Mary Key) and the hotel Melia Buena Vista. Warm breezes, a flamenco show by the pool, mojitos...we drift off to sleep.
Posted by Postcards From The Hedge at 8:33 AM