Animals at the table

My mom tell the story of my dad's cousins having a Very Important Person over for dinner, and finding out during dinner he was a bit of an ass. Mary Jean was of course as polite as could be, she wouldn't say macadam if she had a mouthful, but Ireta did not suffer fools gladly, and became more and more irritated as the evening wore on. When their dog was rubbing up against the guest, looking for handouts, he said "Say! I think this dog likes me!"

Ireta had had enough. "He should," she said, "You're eating off his plate."

The dinner ended rather abruptly, and that was the last time they saw him.

You know I like dogs more than I like most people, and I have a sign in my house that says "If you don't want hair on your clothes, stay off the furniture." But even I draw the line at the table. And cats. Disclaimer:

This Is Not My House. 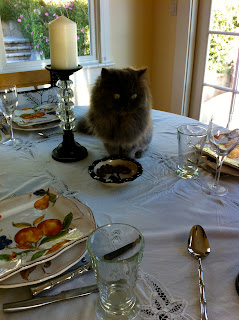 Posted by Postcards From The Hedge at 4:17 PM