When I first heard the phrase, I thought "This green thing has gone too far." I had visions of a weathered old green John Deere with faded yellow wheels and knobby tires, and a large hamster wheel where the engine should be, with a few chickens running like mad, spinning the hamster wheel and powering the tractor - at glacial speed. It's a great visual, but not quite right. 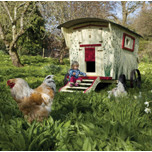 In fact a chicken tractor isn't nearly as complicated, although some are at least as picturesque. 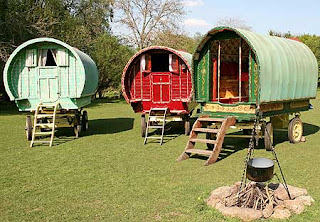 It's a moveable chicken coop. One could argue that in hurricane country all chicken coops are moveable, but that's a different story. Or, as my friend Des says, "That's a whole 'nother Oprah."

I had a client twenty years ago who got chickens  - several dozen, just a day old, from the local feed store. He built a coop with aviary wire and stout posts, closed in on all sides with a sturdy top to keep the skunks and raccoons from snacking on his chickens. And his eggs.

At waist height he hung a row of nesting boxes and filled them with straw. He put a lock on the door, hung my seed-starting heat mat on the wall at floor level to keep the chicks warm, and when the chickens grew up he had the best compost I've ever seen. The cook would throw the kitchen scraps in the coop; the gardeners would dump in the lawn clippings. He would run a mower over branches and trimmings and dump them in too, and the chickens would eat any bugs, peck at everything else, scratch to turn the compost and poop on it adding nitrogen. It would eventually mat down into a cake a few inches thick, so every once in a while someone (usually me) would steer the wheelbarrow into the coop, shut the door (chickens spook easily, and they're not homing pigeons) and using a spade, scoop up the lovely rich composted layer and spread it in the garden. I have never seen roses so big, or raspberries so plump and juicy.

My sisters have had chickens. My mom spent a summer chicken-sitting (enunciate carefully) until the owls discovered the sleeping chickens - no roof, for they were in an old horse corral. Oops. All too soon, no chickens. But I have never had chickens of my own.

2. The sweet soft sounds chickens make when calm and scratching around together. They sound so social, it's what I imagine the farm ladies from my mother's childhood sounded like when they got together.

4. Gathering the eggs still warm from under sleepy chickens softly chuckling and cooing.

5. Sharing with the neighbors. Especially the kids.

Five Reasons Not to Keep Chickens:
1. The smell. Buy some organic chicken manure at the nursery and you'll know what I'm talking about.

2. The not so sweet sounds they can make if you get a rooster (despite having paid extra for all girls). Apparently either chicken sexing is an inexact science or a minimum wage job. And what do you do with an unwanted rooster? (No, please, not over my fence! But I can give you a list of names...)

3. Our neighborhood has a rule against them. They also have rules against clotheslines, more than two pets, parking outside your garage, visible basketball hoops...none of which are enforced, so this isn't a biggie. But...

4. Sometimes chickens are not happy to see you, and not eager to have their hard work (ooh, bad pun) removed from under their warm feathers. So they assault you with their sharp beaks and flapping wings. My grandmother called them broody; I call them murderous nasty beasties. That's after I wash well and put on the band-aids.

5. The neighborhood kids. Can you imaging the highway they would wear through the lawn as they checked every few minutes to see if there was an egg? And brought all their friends within a fifty mile radius?

So maybe I won't get a chicken tractor after all. But at Alamo Hay and Grain there are the most astonishing chicks, yellow and green-black, all fluffy and quietly peeping away...tempting. we will see.
Posted by Postcards From The Hedge at 9:45 PM