On a cool day last fall day I planted garlic in the sticky clay below the bottom lawn. It was the only place there was sun; it was the only place there wasn't some other plant crowding its neighbors and flinging its arm wildly about. The pumpkins I had planted there hadn't thrived in the cold summer; their leaves were covered with powdery mildew. Their few fruits had been cannibalized by voles, the hollow shells left to rot by those furry thieves who had stolen the seeds. I pulled the thin wilted trails of pumpkin vine out and used a spade to make slits in the clay. Trust me, turning the soil to a fine tilth doesn't work here, the clay just sticks back together.

I shoved garlic in the slits in the soil, not believing it could possibly grow there, and tamped the soil back down with my heel. I only planted about a dozen cloves; it was hard work and I was expecting failure. My friend Leslie came down and watched. I didn't have the heart to tell her these were not good gardening practices.

A few weeks later there were gray-green shoots. Encouraging, but still: wet winter. Clay. Didn't get my hopes up. I thought they might put down some roots over the winter, then grow into grown-up garlic in summer.

Last week when I finally went down to the south forty, there were spent stalks falling over. I wanted to try those Cinderella pumpkins again, and I wanted to see what had happened to the garlic, so I shoved a spade in beside a stalk, not expecting much, and I pried out a huge purple head of garlic.

I should explain: I used to grow lots of garlic, plump heads, braided and hung in the garage to be clipped off as needed. Juicy cloves for roast chicken, whole heads roasted and spread on bread. I thought I was a good gardener. In this new garden my best efforts had produced one or two cloves clinging to a withered white stalk. No juicy fat heads. Humbling. So I wasn't expecting this: 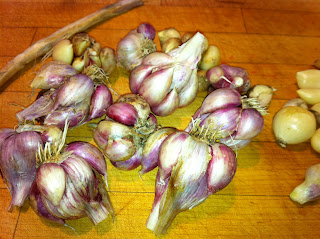 There were strange swellings in the stalk. Expecting some voracious bug that was planning to devastate the rest of my garden I cut open a stalk and discovered... 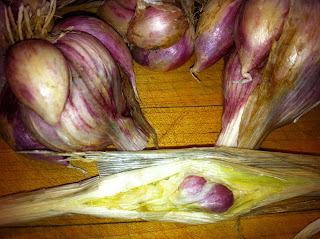 So I've learned some things:
1) Fall plant garlic here. Spring planting worked in my last garden, just a mile away. But not here.

2) Garlic likes heavy soil. I will mulch and continue to dump compost on the clay, but I won't worry about the garlic.

3) Maybe none of the above is true. Maybe it was just dumb luck. Maybe things will turn out totally differently next year. But that's part of the adventure of gardening. And it's not a bad thing to remember about life.
Posted by Postcards From The Hedge at 8:34 AM