"What's blooming?"my friend Aileen from New York asked.  So I went to look.

Ally and Wally were sleeping in, the sun had not yet peeked above the roof, and the garden was fresh from last night's rain.

The crab apples are snowing, the ground under them is carpeted in white. 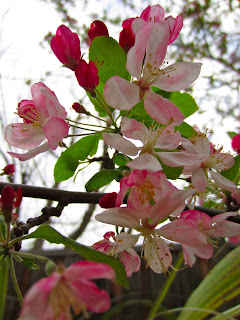 How can something so bright in bud open so pale?

The quince, the edible one, is covered in shell pink teacups: 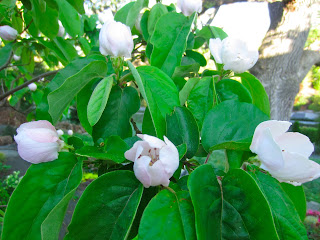 The dogwood has pale green saucers: 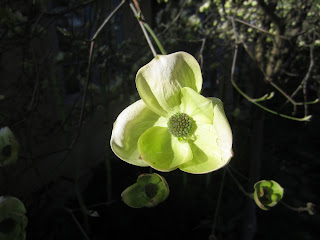 There is a tea party going on in my garden!

I stood underneath the dogwood, admiring the branches against the fresh blue of the sky, until a breeze came by and I was drenched with unshed raindrops.  I shook like a dog. 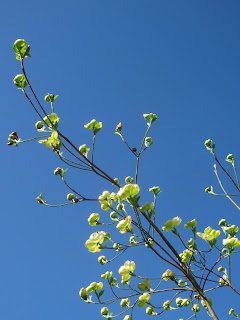 The bluebells Sylvia gave me years ago, for a garden long ago sold, have spread next to the lime coral bells (heuchera 'Key lime pie' in case you want to try this at home) and are just starting to open... 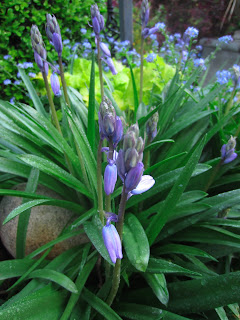 ...as the last of the daffodils are finishing. 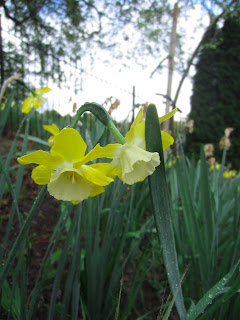 Carol gave me seeds from the columbine that carpeted her garden in spring.  She has been gone more than fifteen years, yet her sweet spirit lives on in my garden. 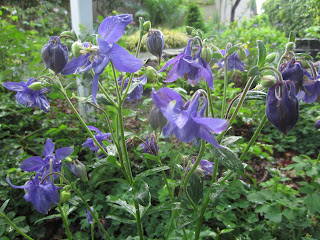 Oddly, columbines got their name from the same root word as Columbarium.  It's the same Latin root that lends its name to dove in so many languages (not ours, tho).  We (humans) used to place our dead in the bases of stone towers, doves nested in the tops.  If you pick a columbine and turn it upside-down you will see a ring of doves, bill-to-bill.  Kissing, the little girls in our neighborhood say.  Pecking, say the boys. 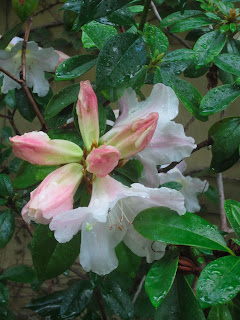 ...and redbud, Wally's favorite.  It seeds all over with its beany pods.  I spend the spring prying its seedlings out from among the iris, the roses...you get the idea.  But we made a deal when we bought this big garden and built a house in it - Wally need never lift a finger in the garden...and the redbud would stay. 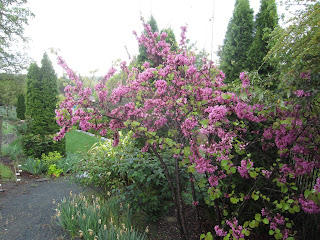 I am picking lilacs, their sweet smell fills the kitchen. 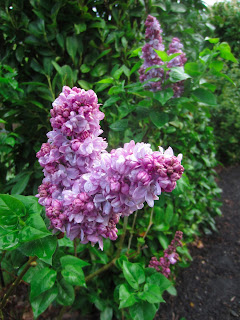 The garden is moody in the morning light, 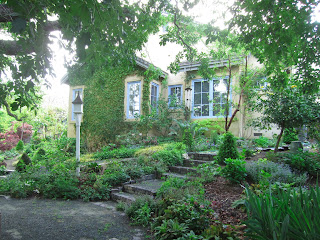 the steps are covered with campanula and fairy dust... 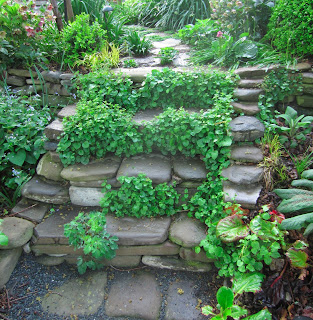 ...and raindrops.  Watch your step!

Posted by Postcards From The Hedge at 9:05 AM