"Stephen, I want to make pickles.  I've never made them before, but I really want to."

"And I want to make the really little ones.  I found some cucumbers on line, this farm has little tiny ones called doll house pickles.  So I ordered a bushel - they were really cheap."

"No idea.  But they're being delivered overnight to the salon.  Since we get so much shampoo and stuff, a bushel of pickles should be no big deal."

"I guess we'll drive in tomorrow then, not take Bart.  I don't know how we'd manage a bushel of cucumbers on the train."  Good thinking.

The next day a big stack of boxes arrived mid-morning at the salon.  Stephen asked: "Dwight, did your pickles come?"

Dwight reached into the pocket of his jeans and pulled out this: 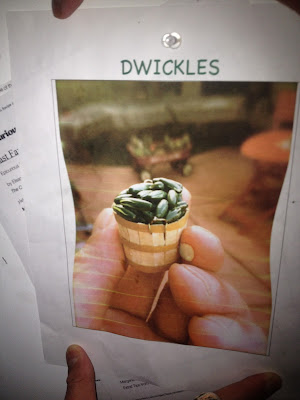 Stephen cracked up.  Then Dwight started laughing.  "But the web site showed a farm!  With dirt and everything!"

Doll house pickles.  For a doll house.  They are tiny...

But that was last year, and this year Dwight made the most wonderful dills - just barely sweet, crunchy and crisp, very dill.  With normal sized cucumbers.  I'd show you the jar but I ate them all.  On hamburgers, out of the jar, diced and stirred into shrimp salad.  And you'll have to get the recipe from Dwight - when pickling season is over.  Right now he's busy.

Posted by Postcards From The Hedge at 10:46 AM