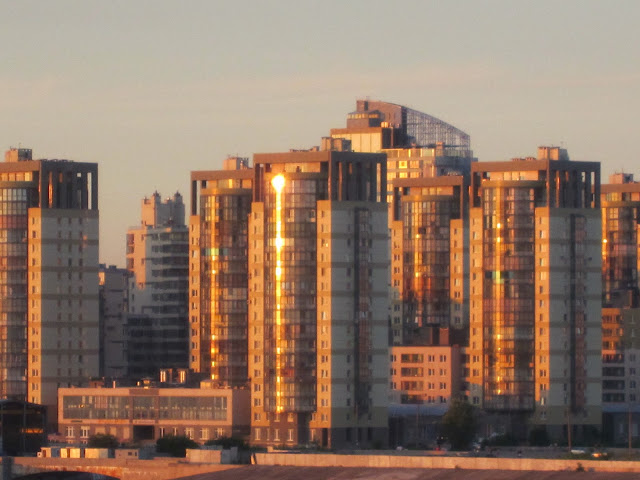 and this is what it looks like at 3 a.m. 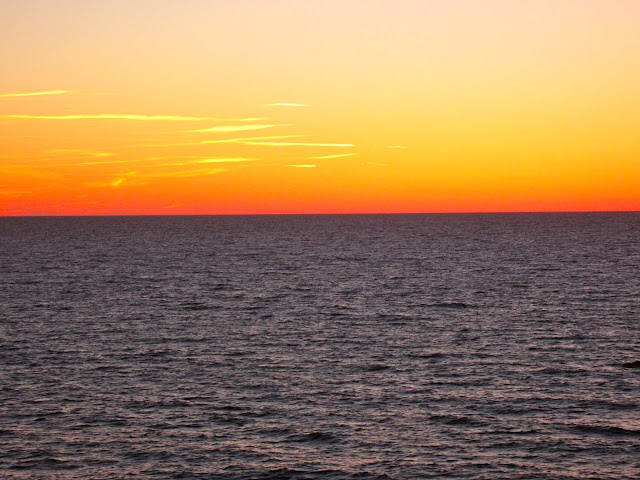 Wonder why we're not sleeping?

In Helsinki Wally had reindeer, smoked and dried.  With wild currant jelly. 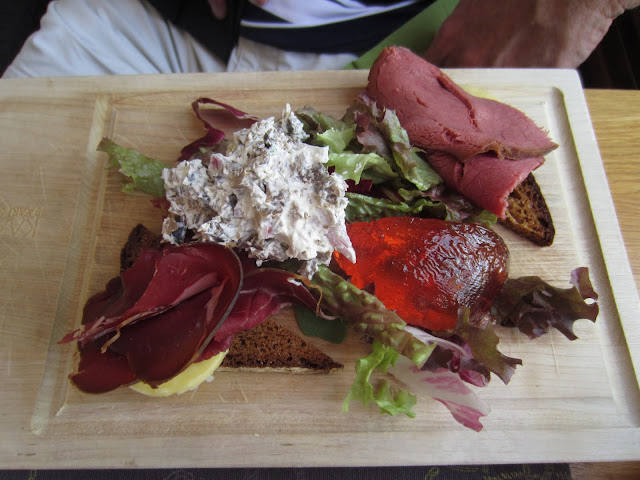 (don't let the kids read this part!)  He called it Santa's rejects.  Eeeewwwww!  I tried the jelly.  Not the reindeer.  I still believe in Santa.  And reindeer.  With presents and a sleigh, not smoked and dried.

They have the dolls-within-dolls in every shape and size: 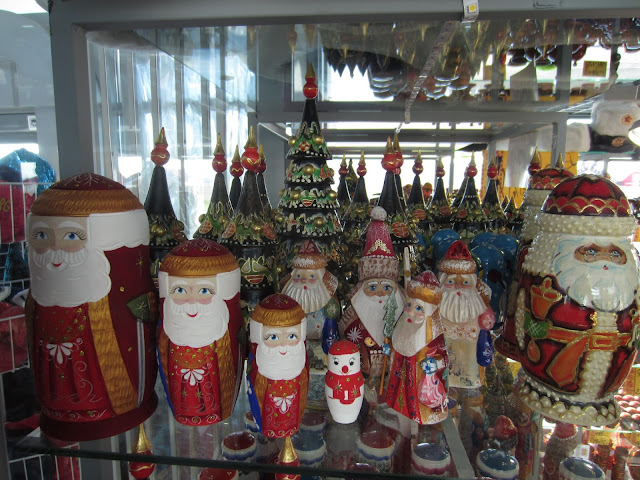 They're even for sale on the ship.  I thought I'd hate the ship - too many people, too huge - this is our hallway: 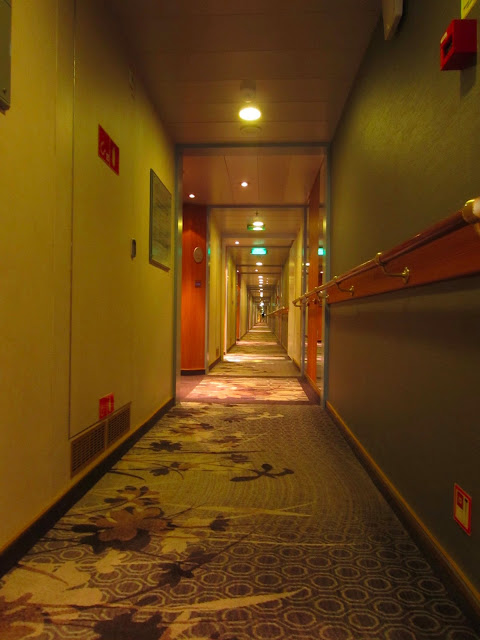 and it's only one side of one of four floors.  But I'm liking it.

The best things:  not waiting in traffic on the way to the airport, in the airport security lines and at the gate madhouse.  Not checking into and out of hotels, having to do the Walk in the Park because your room is next to the elevator and overlooks the dumpster.  Not having to pack and unpack.  Not having to be out by ten and not into your room until four.

The worst things:  lines getting thru customs (bet they're worse at the airport!) the crabby Russians at immigration - what do you think I'm gonna do, try to stay here?  Because of the weather? the food?  your charm?  One customs lady was not going to let me off the ship because my ticket didn't say I had a multi-day private tour.  Apparently you're not allowed to visit on your own.  And she wouldn't let the tour guide in to vouch for me.  Finally I pulled out an email with the three-day itinerary printed and she let me in.  I could have sent that email to myself! but it was written so official.

The weather has been fabulous.  So good, in fact, our tour guide in St Petersburg took a picture.  Of the weather.

Seeing all the sights. 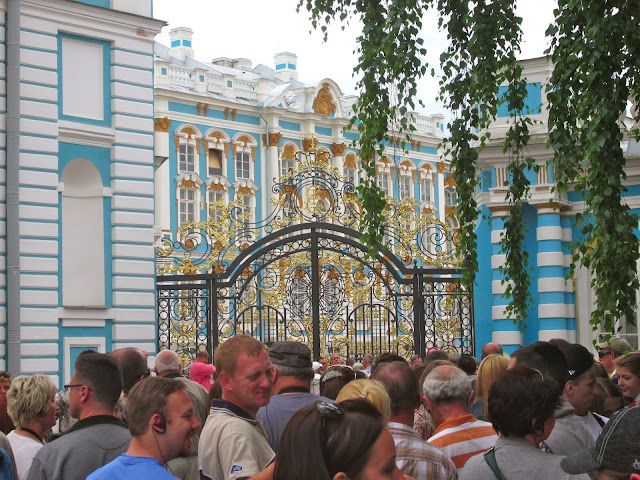 So are 6 other cruise ships full of people.  Wally estimates there are 10,000 in town today from the ships alone...and there is a World Economic Forum.  Plus Midsummer night.  And Red Sails, the annual graduation celebration/concert/drunken bash.

The Catherine Palace is spectacular: 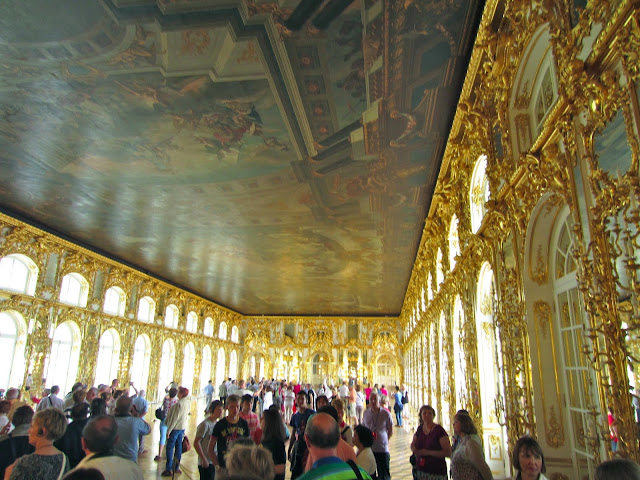 and crowded.   All that glitters here is gold - real gold.  With the weather it needs re-doing about every ten minutes. 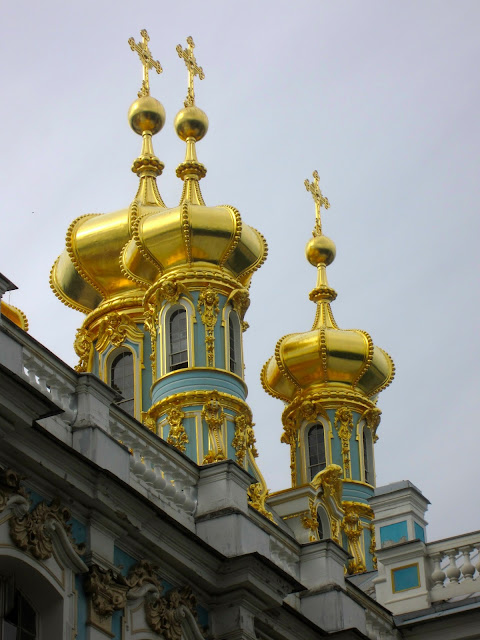 As we were walking thru our third incredibly ornate palace, Wally said, "If I were a peasant and saw how the Czars were living, I'd have revolted too!"

Bob just smiled and said "It's good to be King."

Speaking of King...we have lunch in Putin's favorite restaurant. 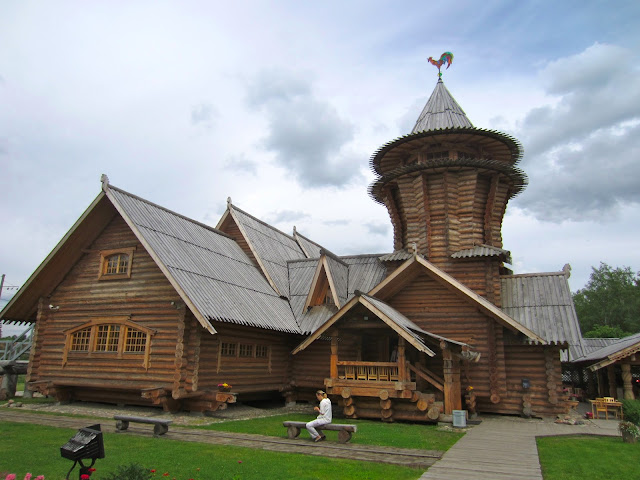 Bread spread with sour cream, borscht cold and hot.  Beef Stroganoff (and later we drive past the Stroganoff Palace), chicken Kiev (nope, we don't drive past that.  Too far.)  Later we have Herring In A Fur Coat.  Not such a big hit.

Everyone is talking about Putin's divorce, his gymnast lover and their two sons.  And the fact that for years just gossip could get you sent to Siberia.  Now it's okay - to a point.  We ask about the jailed Oligarchs and are told "Officially, tax evasion.  Unofficially, they pissed Putin off."  There is a line you don't cross - they crossed it.   They shrug.  They're not in jail.

The Palace at Peterhof is immense: 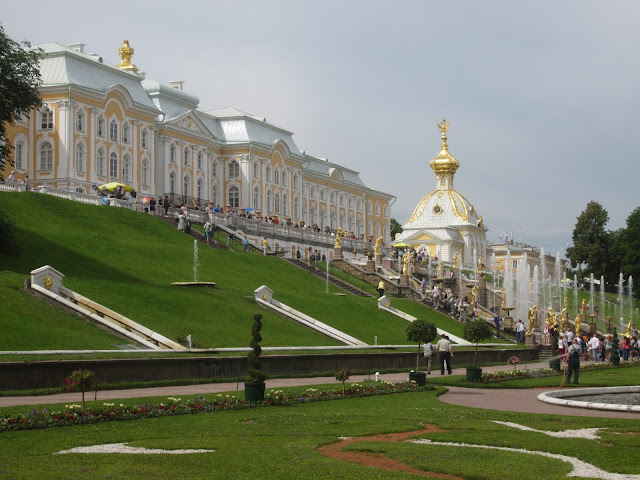 The gardens are ginormous, and packed with Russians enjoying the rare sunshine.  One of these little girls is soaked: 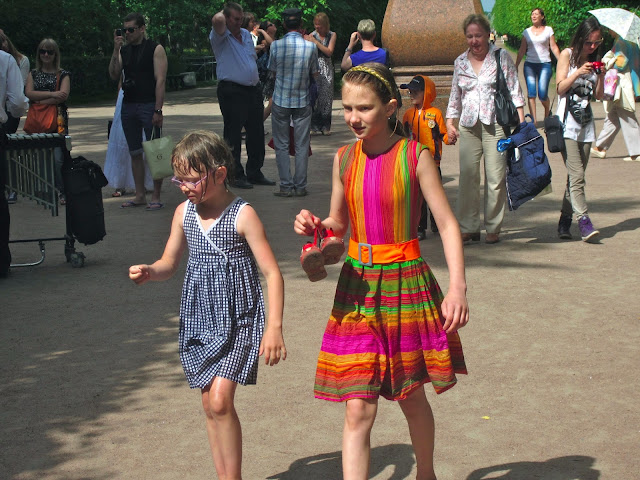 ...because Peter had a wicked sense of humor.  He had lots of trick fountains, and he'd say to his guests "You go on ahead, I have an important matter fo state to attend to.'" Then when they were up the avenue, he'd hit the pedal on the trick fountain and soak them.   Ha ha.

These boys are not getting out unscathed... 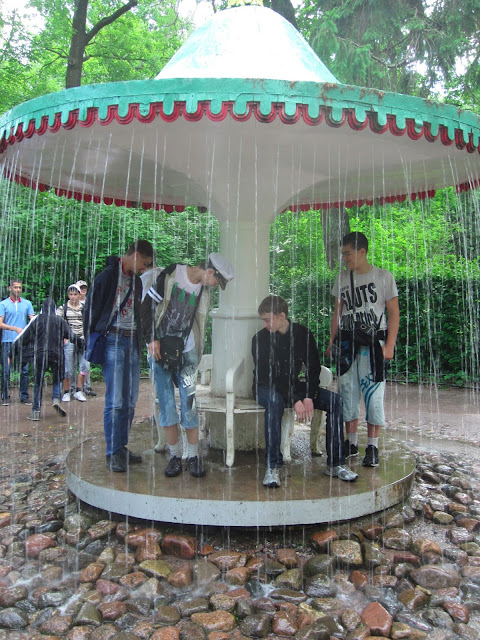 There are serious fountains too - this one represents Russia's victory over Sweden.  Sweden is the fish. 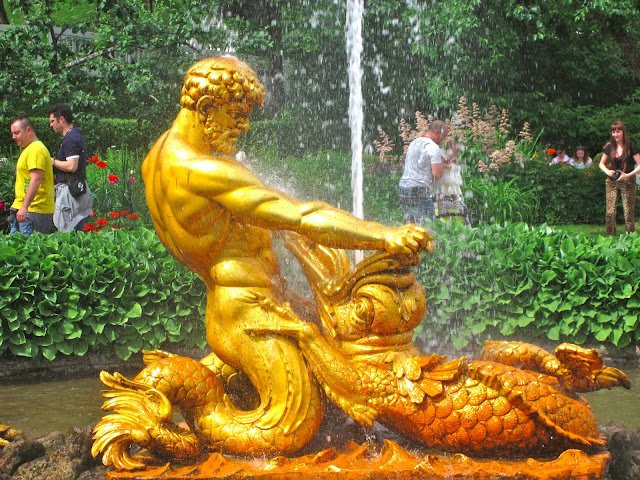 More tomorrow, we are about to sail.

Posted by Postcards From The Hedge at 5:54 AM