The Mumbai airport has seats for about a third of the waiting passengers  So the rest flop down on the stairs leading to the gates, or lean against the walls, balancing laptops on one knee.  Or stand and watch a dubbed version of Conan The Barbarian playing on flat screen TVs  everywhere.

Appparently the plane has the same problem as the airport.  Not enough seats.  Tim and Sylvia get bounced, and are to spend the night at an airport hotel (ah, luxury!) and join us tomorrow morning.

As Vivik is tucking them into a cab, a friend who works at the airport tells him to wait...apparently there is a little wiggle room in the closing time of the flight, and as the Indian travellers are on Indian Stretchable time, they tend to arrive a bit late.  Sure enough.  The agent closes the flight at the earliest legal time, and as Tim and Syl are handed their tickets, the late travelers whose seats they got arrive in a  flurry.

As we are waiting to climb the stairs to the tiny plane, moaning about the unfairness of life (Tim and Syl's, not ours - we're on the way to a palace!) Sylvia sneaks up from behind and gives me a hug.  I'm so happy to see them I can’t stop grinning.

We drive thru a wedding (groom on white horse has to make way for our bus.  Not happy.  Bad video.  Probably a bad omen too, unless his parents own a bus company.)

You have to take a boat to get to the Taj Palace Hotel.   The Maharana's winter palace across the water is lit up like an octogenarian’s birthday cake. 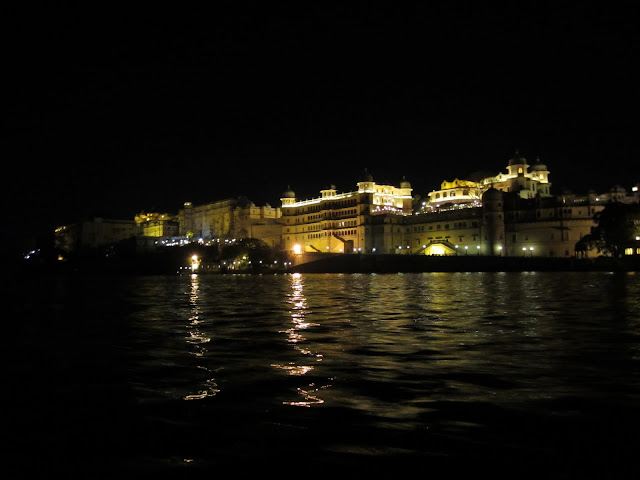 In the morning we explore the hotel. 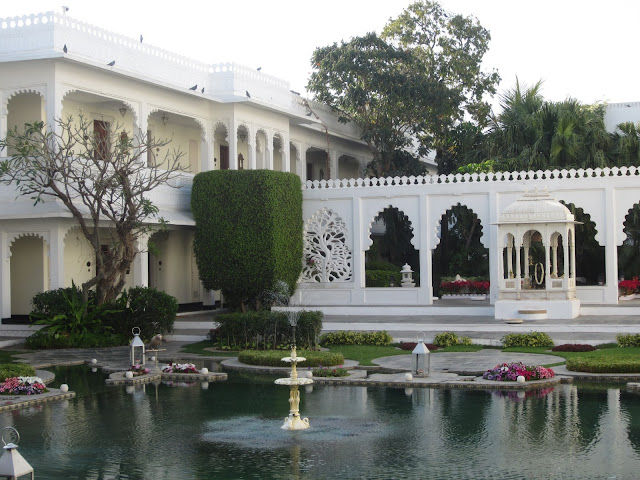 It was the summer palace of the Maharana of Udaipur.  On an island in the middle of a lake.  They built the palace, then the dam.  Smart.  I could stay here forever.

It's good to be king.  Or Maharana.

Posted by Postcards From The Hedge at 5:14 AM