The Taj Palace Hotel in Jaipur is stunning - yes, another palace - this one belonged to a guy who was, for a time, the richest man in the world.  The Maharajah of Jaipur.  When he was born, the first male heir in two generations, his delighted family opened so much champagne he was nicknamed bubbles.  And the nickname stuck until he died,  just 2 years ago. 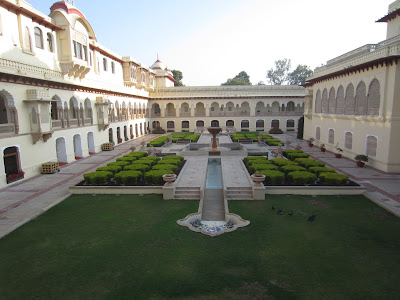 The rooms, to someone who's never lived in a palace, are over the top.  In a good way.  I'm not complaining, but I'm also not redecorating. 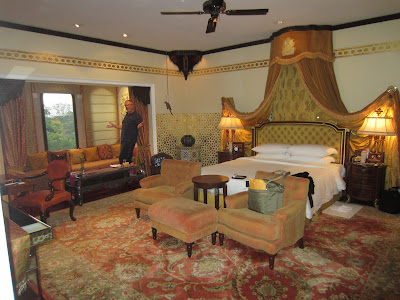 And in the main courtyard there is a guy we call the Pigeon Popper.  His job?  Wave the flag at the pigeons to keep them off the fountain, and when waving doesn't work, whack the flag with his stick.  Pop!  Pigeons fly up...pigeons come back.  Guaranteed employment. 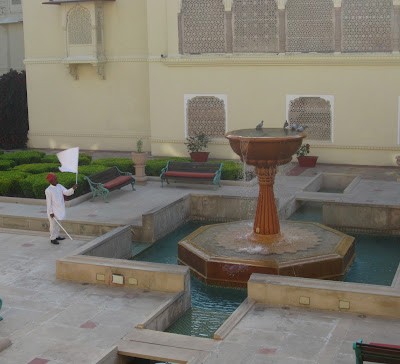 It's a bit like being near the Pacific flyway on the opening day of hunting season.  But it's easier on the birds - this is a Hindu country, and you never know, you could come back as a pigeon.

In the lap of luxury, I'm glad I'm a guest here, and not a pigeon. 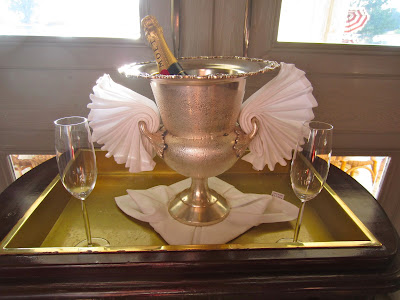 Posted by Postcards From The Hedge at 4:51 AM